EuroCham and the Ministry of Industry and Trade have co-orgainsed the Vietnam-EU Trade Forum 2021 “EVFTA – Leverage for the trade and investment cooperation in the new normal” celebrating one year implementation in Hanoi. 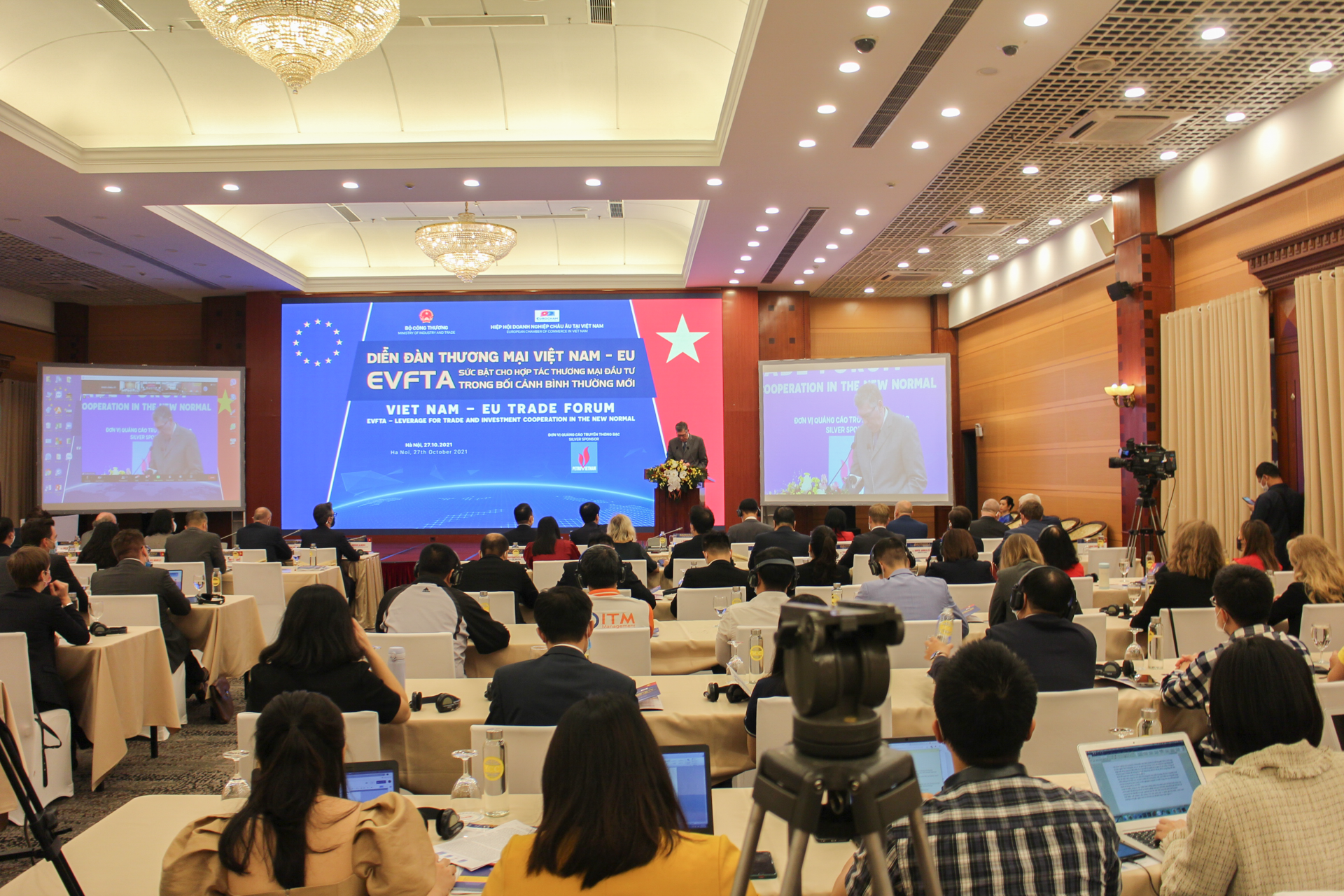 H.E. Mr Giorgio Aliberti, head of Delegation of the European Union to Vietnam and Mr Carsten Schittek, Head of the Trade Section, joined the forum among other representatives from European embassies.
The forum was held in hybrid format connecting 50 provinces online, of which, Ms. Phan Thi Thang representing Ho Chi Minh City People’s Committee, has shared its perspective among Vietnamese enterprises as well as European investors in Vietnam from all sectors.

Mr. Dang Hoang An opened the forum with a brief report on the trading between EU and Vietnam in the last year despite the challenges from the global pandemic. He addressed that after more than a year of implementing the Vietnam-EU Free Trade Agreement (EVFTA), Vietnam has now risen to become the EU's largest trading partner in the ASEAN region. This is an optimistic view on a strong bounce in the development of trade and investment cooperation between Vietnam and the EU in the context of the new normal. 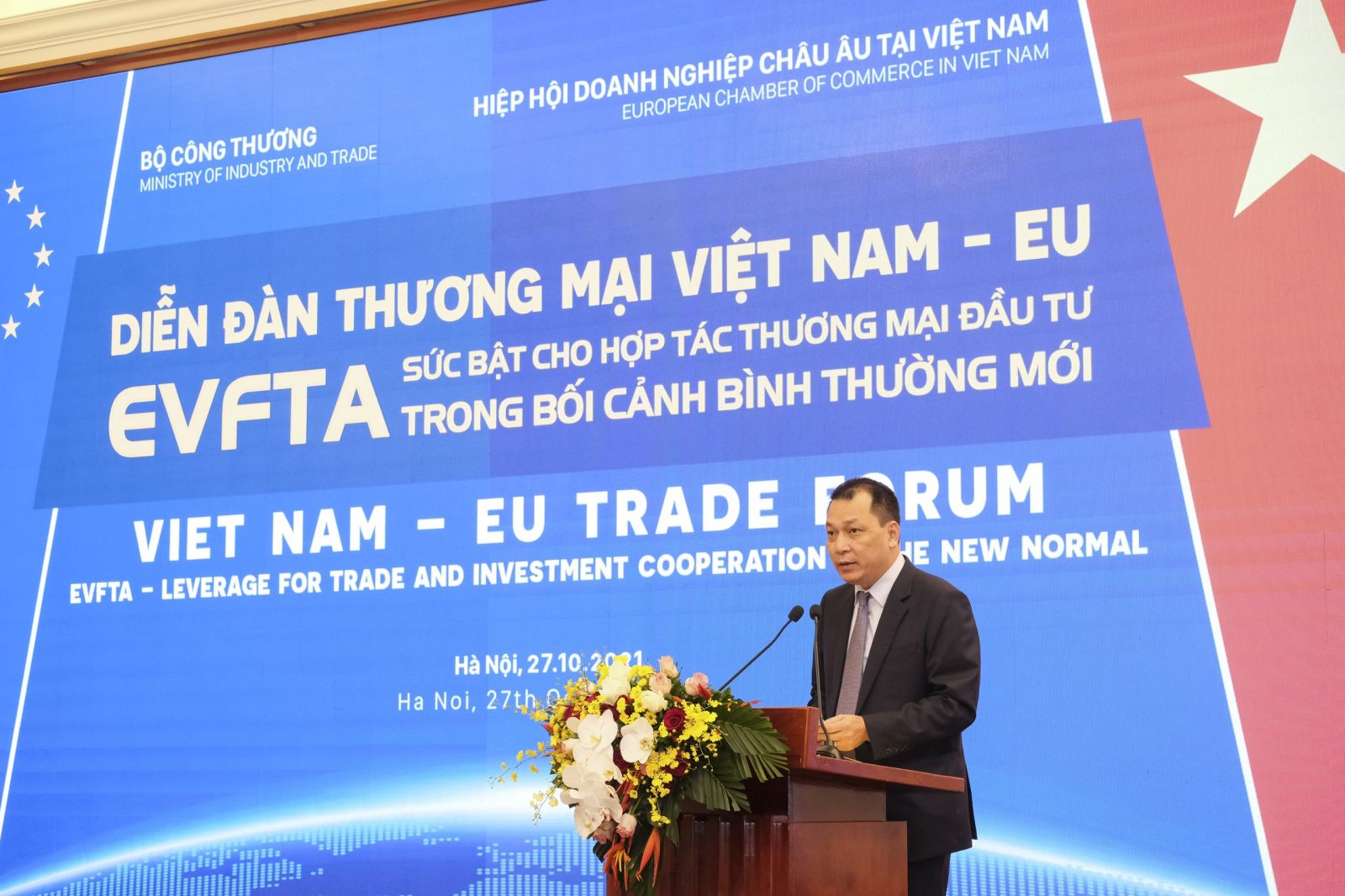 The EVFTA is not only a lever to promote two-way trade, but also a preeminent advantage for the business communities of both sides despite the global economic and trade being seriously affected by the COVID-19 pandemic.
Although Vietnam was severely impacted by the 4th outbreak of the epidemic in the southern key export region, in the first nine months of 2021, two-way trade between Vietnam and the EU still recorded positive growth with a turnover reaching $41.3 billion, up 13.4% over the same period in 2020; in which, export reached 28.85 billion USD, up 11.7% and import reached 12.4 billion USD, up 17.6% over the same period in 2020. More and more enterprises have received benefits from the preferential certificates of origin (C/O) through EVFTA.

He believes Vietnam needs to develop appropriate scenarios to adapt to the new situation, unleash all resources for economic recovery and development, and assurance of the supply chain flexibly and effectively. In the meantime, there are still requests for active support, lifting of difficulties for companies to set up the investment environment for companies. The Government cannot let the economy miss a beat in the trend of world economic recovery.

Meanwhile, H.E Mr Giorgio Aliberti have pointed out challenges from the impacts by global pandemic and the promising outlook for Vietnam’s economic recovery and development through EVFTA.
First of all, it is believed that The EU – Vietnam FTA has come into effect at a critical time when free trade plays a crucial role to help economies recover from the negative impacts of the pandemic. This ambitious FTA has undeniably brought direct benefits to businesses, in particular through the tariff cuts immediately implemented on both sides. Export from Vietnam to the EU market have increased by around 20% despite COVID-19. We have seen sudden rise in export items from Vietnam such as fishery (+18.6%), rubber (+57%) or fruits (+12.5%) – all products of key interest to Vietnamese farmers and producers.

The way the EVFTA is implemented will determine whether our bilateral trade can develop in a balanced way. While The EVFTA in its first year of existence has provided profits mainly to Vietnam, the tariff cuts are not enough for EU companies to enter the Vietnamese market. Vietnam’s regulatory system does not allow EU companies to profit from the EVFTA. These are all the measures that come from regulatory requirements going beyond the simple customs formalities. This second phase will also require us to address more horizontal regulatory areas like IPR and public procurement. In addition, the area of conformity assessment, requiring testing and certification may need a complete overhaul.

He further called for key attractions to investor from Europe:  1. Regulatory reforms in Vietnam, a framework legislation on testing and certification to reduce the excesses and the proliferation of mostly unproductive stamping of forms; 2.  Increase of trade  3. the legislative framework on workers’ rights, environmental protection and climate-neutral energy. 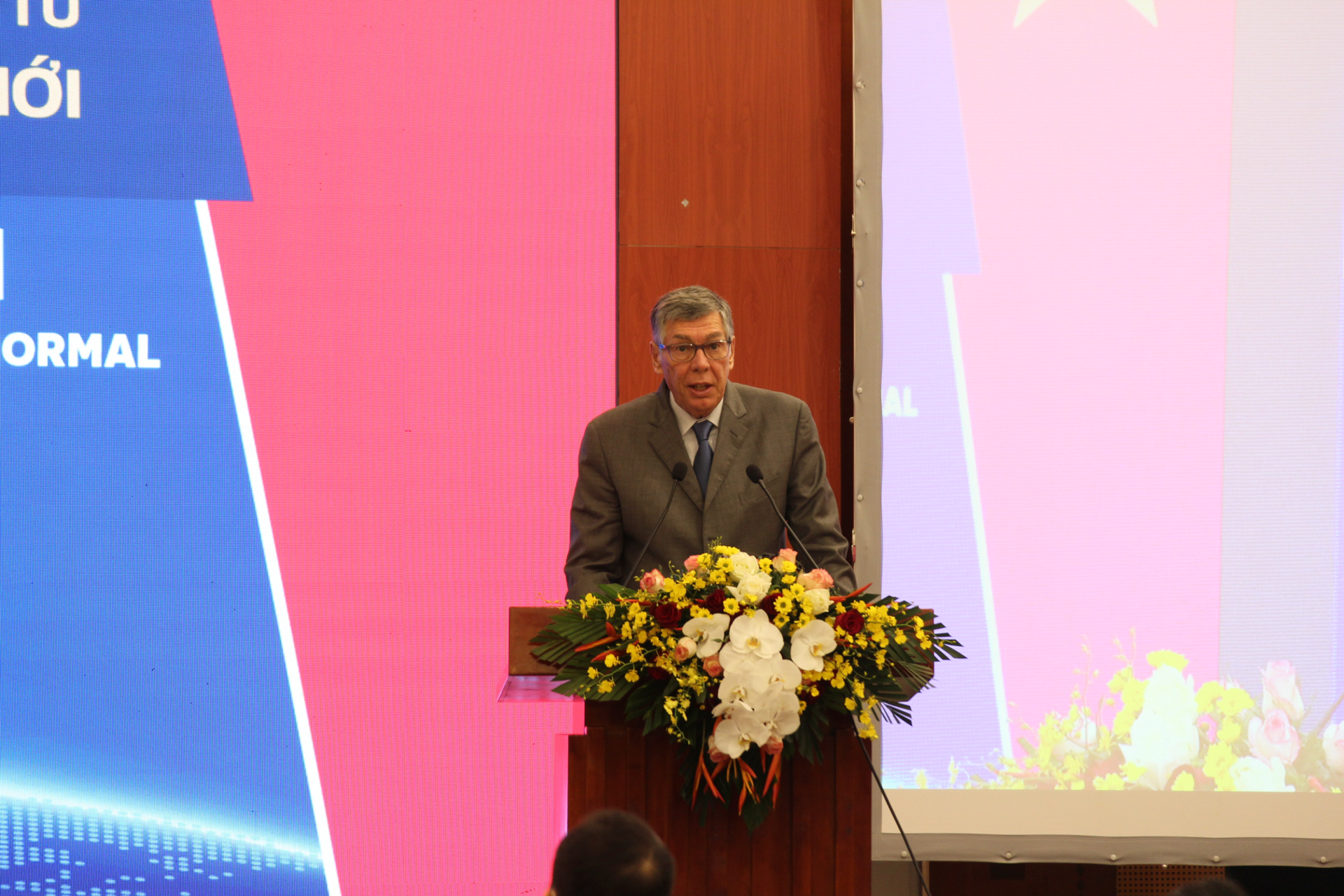 Mr. Alain Cany shared that the pandemic has had deep and far-reaching impacts on trade and investment both here in Vietnam and around the world. It began with tourism and aviation as international borders closed and flights were grounded. Then it soon spread to other sectors and industries as entire countries locked down and citizens remained in their homes.
This has had a profound impact on member companies. Nine-out-of-ten European enterprises saw a negative impact during the fourth wave outbreak. prolonged lockdowns put these investments at risk as almost one-in-five companies shifted at least part of their production elsewhere.

Even during a global pandemic, the EVFTA has delivered on its promise. Some of the biggest winners have been products such as electronic goods, footwear and clothing, furniture, seafood, and coffee. However, while the tariff elimination schedule has been implemented as planned - or at least backdated to provide the benefits as agreed - remain some challenges in the smooth implementation of the EVFTA.
It is, therefore, imperative that Vietnam embraces competition as a positive aspect of free trade agreements. Since our markets complement each other - we each produce goods that the other does not - this is a true ‘win-win’ agreement. Competition is a great motivator: It helps to spur innovation, improve standards, and increase efficiencies. In other words, higher trade with Europe can help domestic companies to level-up at home and become more competitive in international markets.

The economic outlook for EU-Vietnam trade - and for Vietnam’s economic growth in general - is bright. Together, if we can unlock the full potential of the EVFTA, EVIPA and resolve the teething problems of doing business in the ‘new normal’, there would be a new wave of FDI from European investors looking for a prosperous, safe, and competitive place in which to invest and do business.

This forum has opened an exemplary platform for exchanging views post COVID -19 pandemic between government and enterprises.
In the first panel, Mr. Ngo Chung Khanh, Deputy Director General, Multilateral Trade Policy Department/ MOIT addressed that Vietnam may lose its chance and privilege in time to other neighbour countries as EU is negotiating with others such as Malaysia and Thailand. Vietnamese enterprises are encouraged to clarify between standards and barriers and to focus on the development of training and quality in order to satisfy the high criteria of European market and European consumers in particular.

Meanwhile, Mr. Carsten Schittek highlighted that no area of policy of EU is not affected by the global pandemic. However, the EU trade policy was issued in Feb, and has enabled the economy open and dynamic in terms of changes to business climate and competition, in which Vietnam can take part in the value chains. 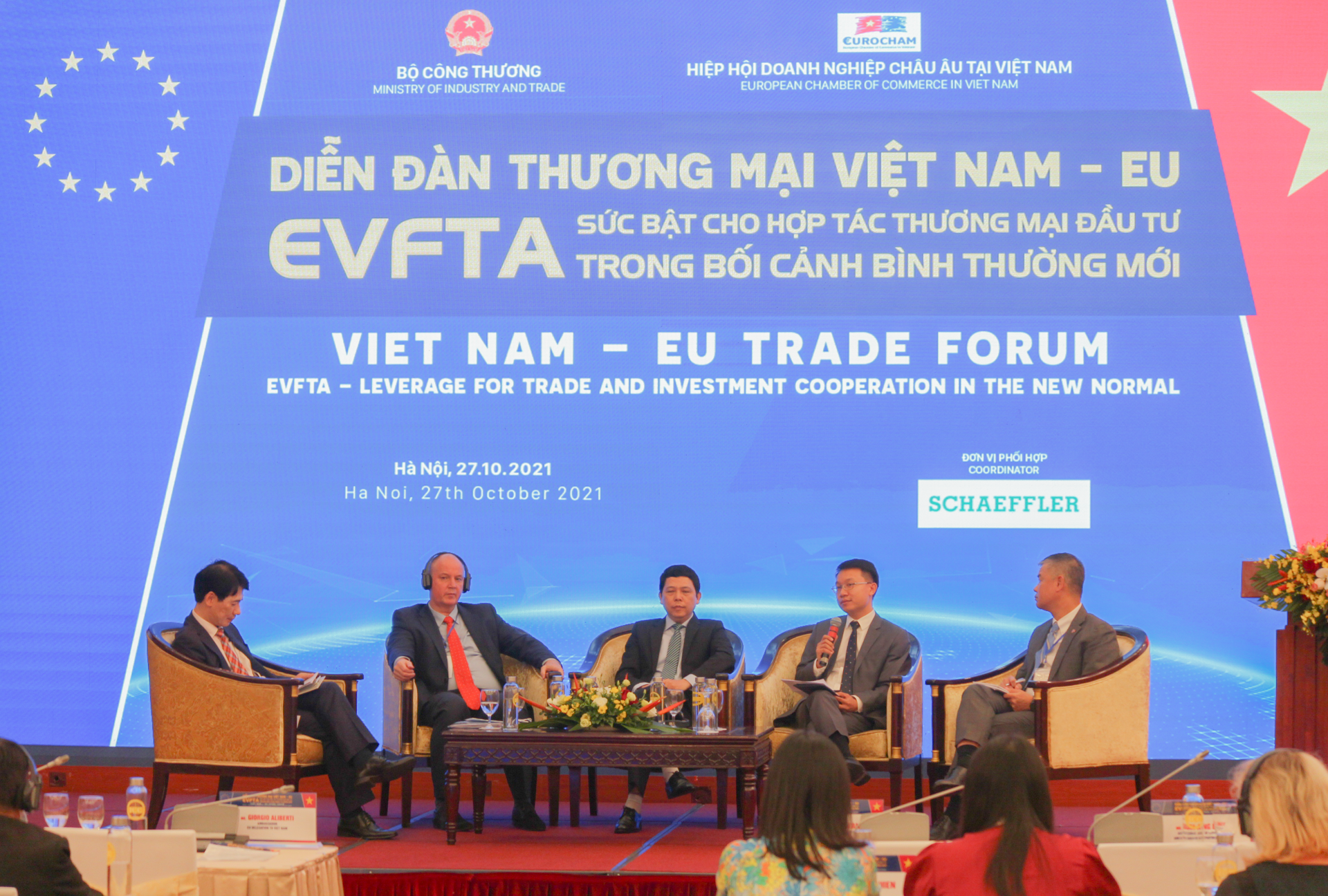 The second panel featured enhancement of investment cooperation. Mr. Nguyen Hai Minh, Vice Chairman of EuroCham, also stressed that the tendency of shifting production from Vietnam to other countries in the region, as we have seen in the last few months, is considered as a mean of diversified supply chains. The mentioned difficulties due to the long-distancing are only short term. Vietnam is still recognised as a potential and attractive environment, and European investors are committed to a long – term investment in Vietnam.