EuroCham Speaks at the Video Conference: “Implementing the Action Plan of the EU-Vietnam Free Trade Agreement”

On the 6th of August 2020 in Hanoi, Prime Minister Nguyen Xuan Phuc presided over a video conference on the action plan to implement the EU-Vietnam Free Trade Agreement (EVFTA) which took effect on the 1st of August. Attendants to the event included the Deputy Prime Minister, Foreign Minister, several Cabinet Ministers and leaders of all 63 provinces and cities, as well as Vietnamese business associations’ leaders, and heads of diplomatic missions from EU member states. 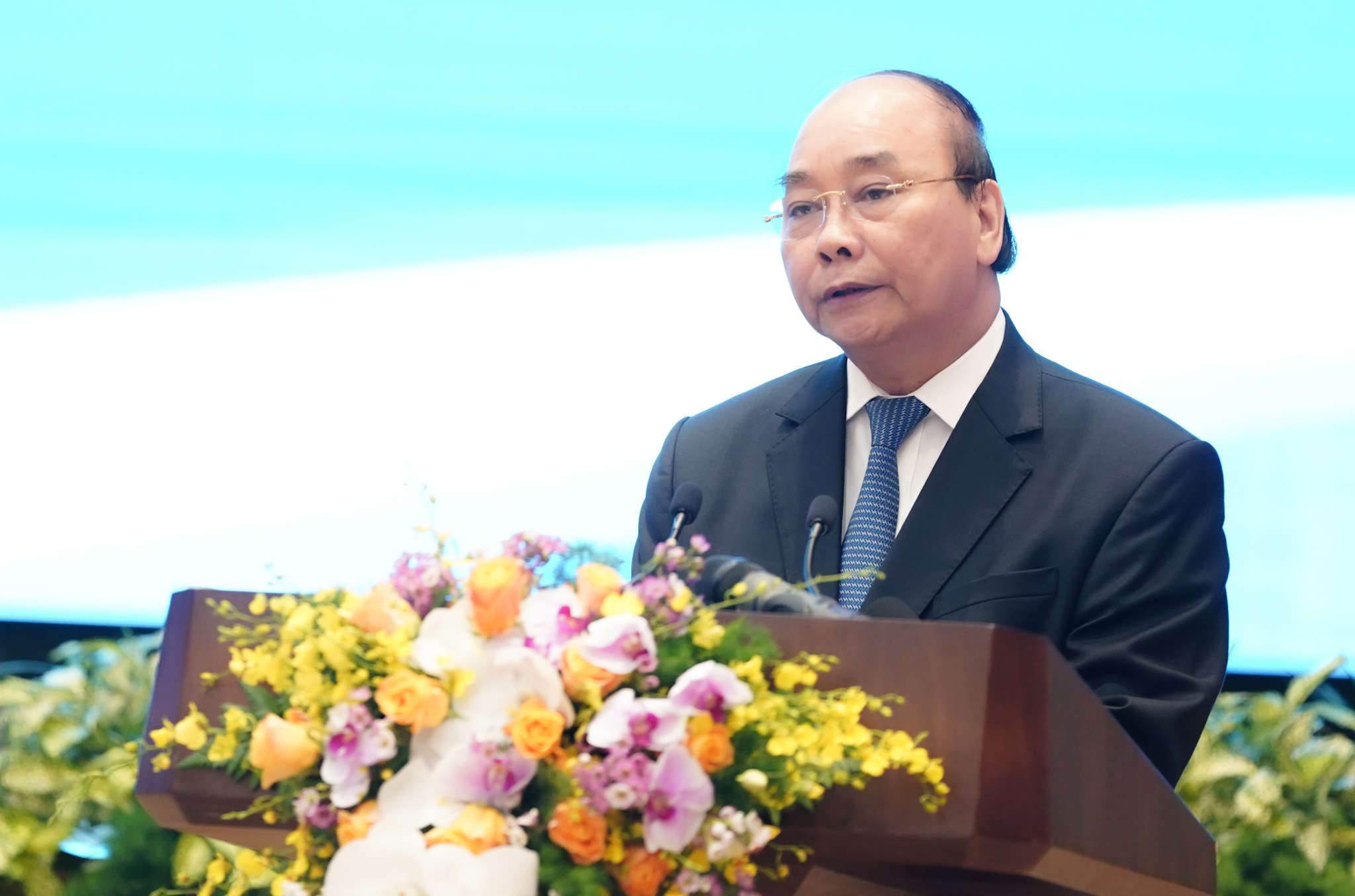 Delegates at the video conference discussed a wide range of major issues related to the EVFTA, including: communication of international economic integration in general and the FTA in particular, solutions to effectively take advantage of the agreement’s commitments, human resource and infrastructure development, and finding solutions for efficient investment. 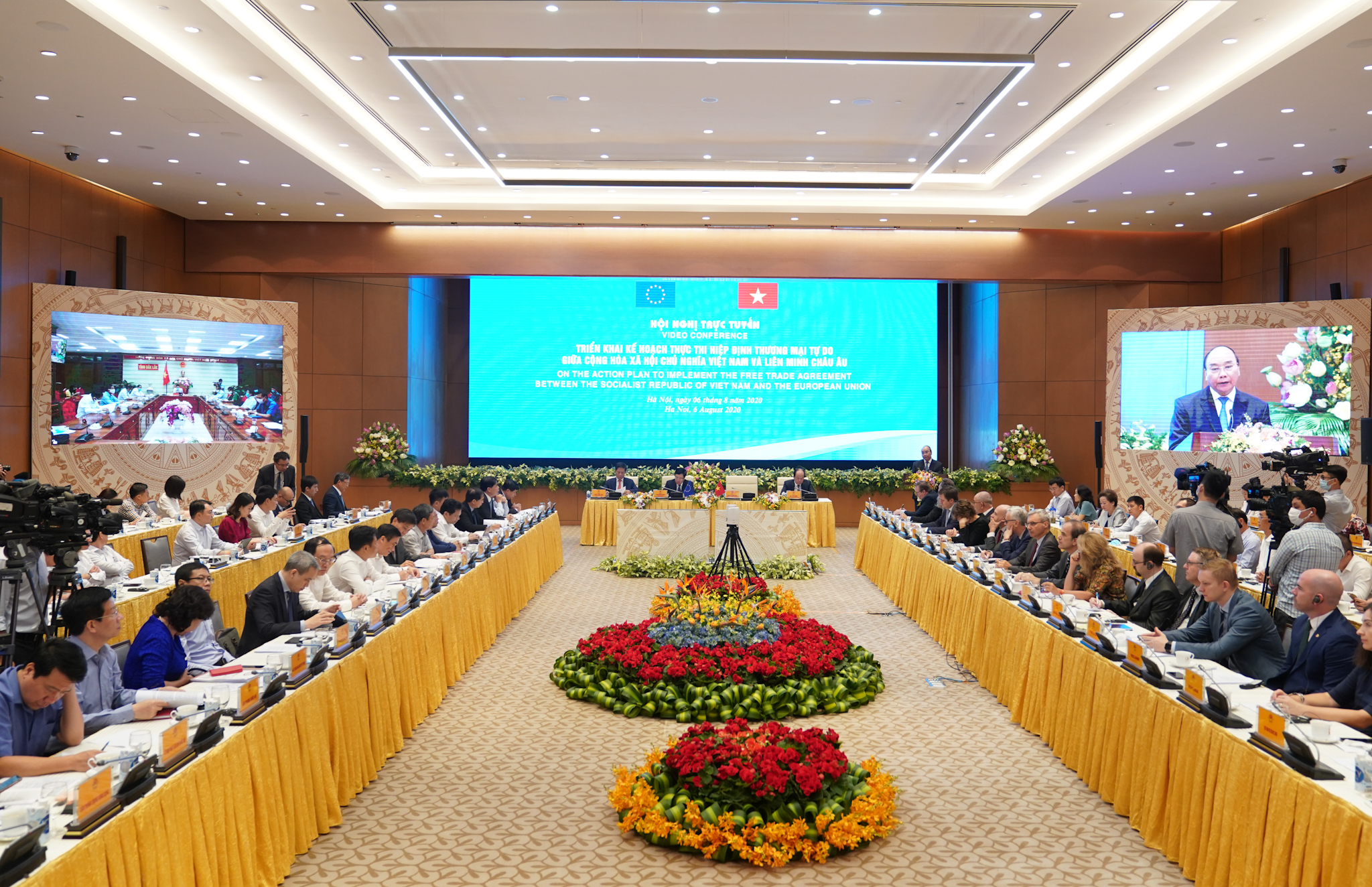 Video conference on the EVFTA implementation dated 6th of August, chaired by Prime Minister
(Source: Vietnam Government Portal)
EuroCham was the only foreign association to attend and deliver a speech at the conference. On behalf of the Executive Committee of EuroCham and its one-thousand members, Vice Chairman Jean-Jacques Bouflet congratulated the Government of Vietnam on securing this historic free trade agreement with the European Union. The EVFTA is just the second FTA agreed between the EU and an ASEAN country, and it is also the most comprehensive and ambitious deal ever signed by EU with a developing nation. Therefore, it is clear that this EVFTA is a vote of confidence from the European Union in Vietnam, its record of reform, and its strategic importance on the world stage. 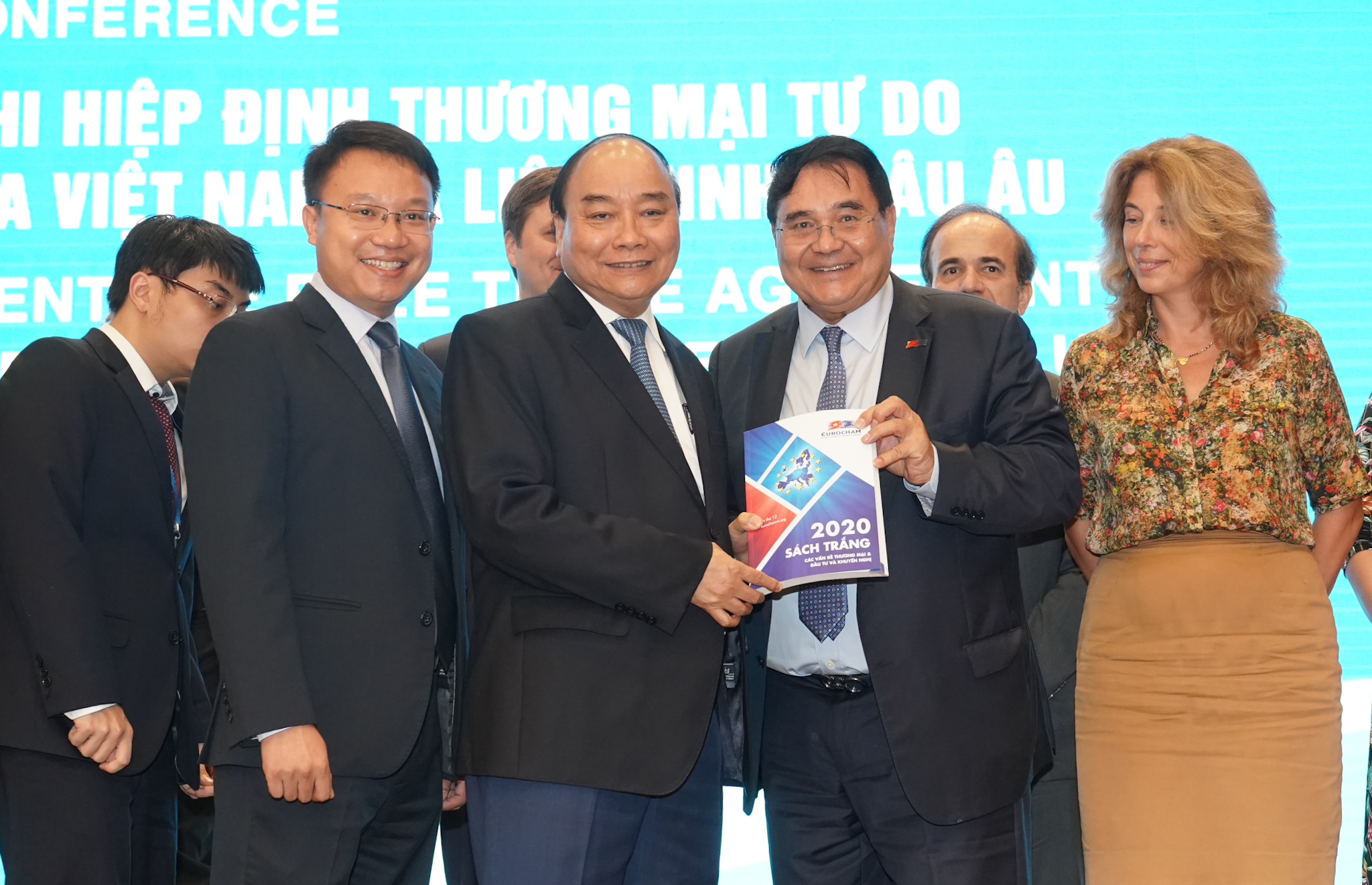 EuroCham Vice Chairmen Nguyen Hai Minh and Jean-Jacques Bouflet proudly present to Prime Minister H.E. Nguyen Xuan Phuc the latest edition of the Whitebook
“EuroCham will dedicate itself to ensuring a smooth and effective implementation of the FTA, working with the Government, particularly MOIT and other Ministries, as well as the EU Delegation and EU member states’ embassies, utilizing the full resources of the Chamber, its 1000 members and 17 Sector Committees. Furthermore, EuroCham will reach out to partner organisations like the Vietnam Chamber of Commerce and Industry (VCCI) to create the EU-Vietnam Business Council, providing a platform to discuss common issues and a tool with which to resolve them, as well as to connect the business community of both sides”, said the Vice Chairman. 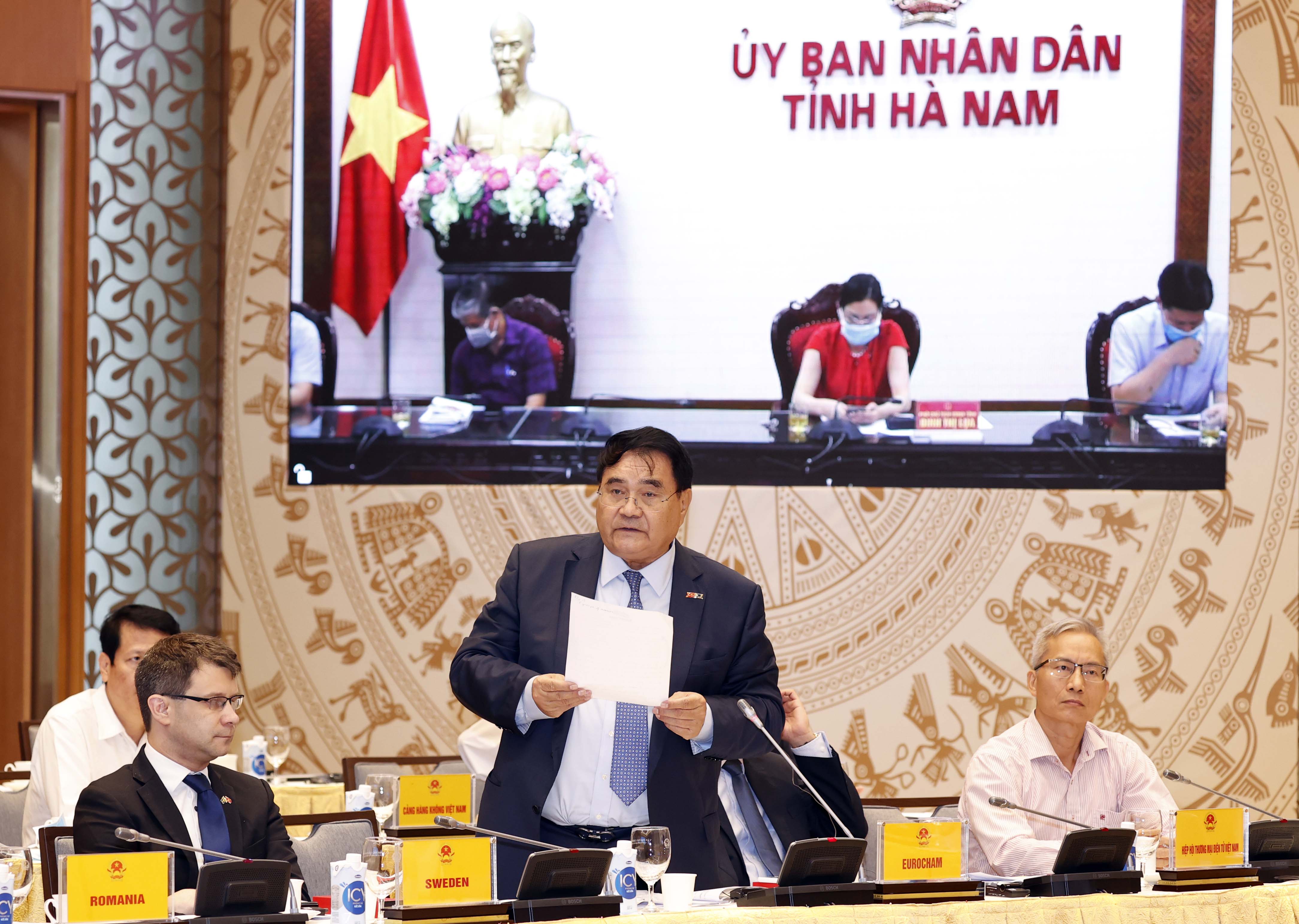 Vice-Chairman Jean-Jacques Bouflet speaking at the event on behalf of EuroCham
While Vietnam has made huge strides in streamlining and modernizing its legal framework and investment environment, further reforms could help to attract more foreign direct investment from Europe and encourage new enterprises to take advantage of the gradual reduction in tariffs. EuroCham will continue to share the insights and recommendations of its Sector Committees regarding administrative reform in light of the EVFTA. “In conclusion, EuroCham remains at the disposal of Vietnam - it’s Government, Ministries, and provincial authorities - to help make the EVFTA a success, for the benefit of both sides’ companies, citizens, and socities”, said Mr. Bouflet.

Speaking at the conference, Minister of Industry and Trade, H.E. Tran Tuan Anh, stressed that in order to help businesses take full advantage of the opportunities that EVFTA brings, it is necessary to remove barriers to manufacturing and business activities of enterprises through administrative reforms, policies with the motto of creating the most favorable conditions for businesses, promoting transparency and fairness, without discrimination between economic sectors. 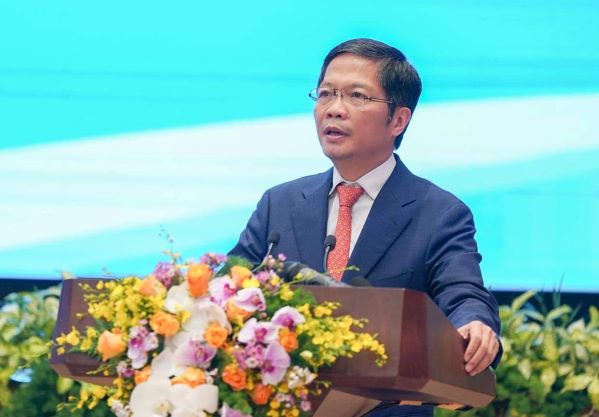 It is worth noting that the EU has an auxiliary import and export structure for Vietnam and, therefore, does not directly compete with domestic goods. Therefore, the goods that the EU has advantages when imported into the Vietnamese market, such as machinery, equipment, etc., will help support the domestic industry to reduce costs and improve production capacity.

At the meeting, other business associations’ representatives in various fields, including textile and garment, leather and footwear, seafood, and e-commerce also shared their insights and issues of each sector and provided recommendations for the Government to address them and reap the full benefits of the EVFTA. Meanwhile, Dr. Vu Tien Loc, Chairman of VCCI stated that integration in general and the EVFTA in particular can only be successful if the small and medium-sized enterprises become the main actors and benefit from this process. Dr. Loc suggested that enterprises consider changing business models, upgrading governance system towards global standards in terms of not only technology but also human resources in order to ensure sustainable development. The VCCI Chairman also reiterated that, in light of the EVFTA’s implementation, the EU-Vietnam Business Council launched by VCCI and EuroCham in the coming weeks is expected to provide effective tools to support the business communities of both Vietnam and EU.

Later, the Vice Chairman of the Ho Chi Minh City People’s Committee, Mr. Duong Tan Hien, shared that the city will organize training courses on the EVFTA for officials according to each industry, and closely update specific job requirements to provide practical support to businesses. Recently, on the 28th of July, the City’s leaders and EuroCham co-organised a Dialogue to disseminate information about the EVFTA and discuss difficulties and solutions for businesses in terms of the implementation process.

In his closing remarks, the Prime Minister said the EVFTA is expected to contribute 3.25 per cent to Vietnam’s economic growth in the first five years, an additional five per cent in the next five years, and seven per cent more for the 5 subsequent years. A Government action plan to implement the trade deal has been promulgated, focusing on five major tasks. They are communications and information dissemination, law and institution building, measures to improve competitiveness and develop human resources, the policies for trade unions and workers' organizations at enterprises, and policies on welfare, environmental protection and sustainable development.