EuroCham speaks at the Conference between the Prime Minister and businesses

On the 9th of May 2020 in Hanoi, the Office of the Government in co-ordination with the Ministry of Planning and Investment organised a conference between the Prime Minister and businesses with the theme “Working Together, Overcoming Challenges, Seizing Opportunities, Recovering the Economy”. H.E. Prime Minister, Nguyen Xuan Phuc chaired the event.

This conference was organised in a special format with the largest access scale ever via video conference with 63 provinces and cities, 30 ministries and Government agencies and broadcast live on national television. About 800,000 businesses nationwide, as well as over 5 million business households and people across the country could follow the event. 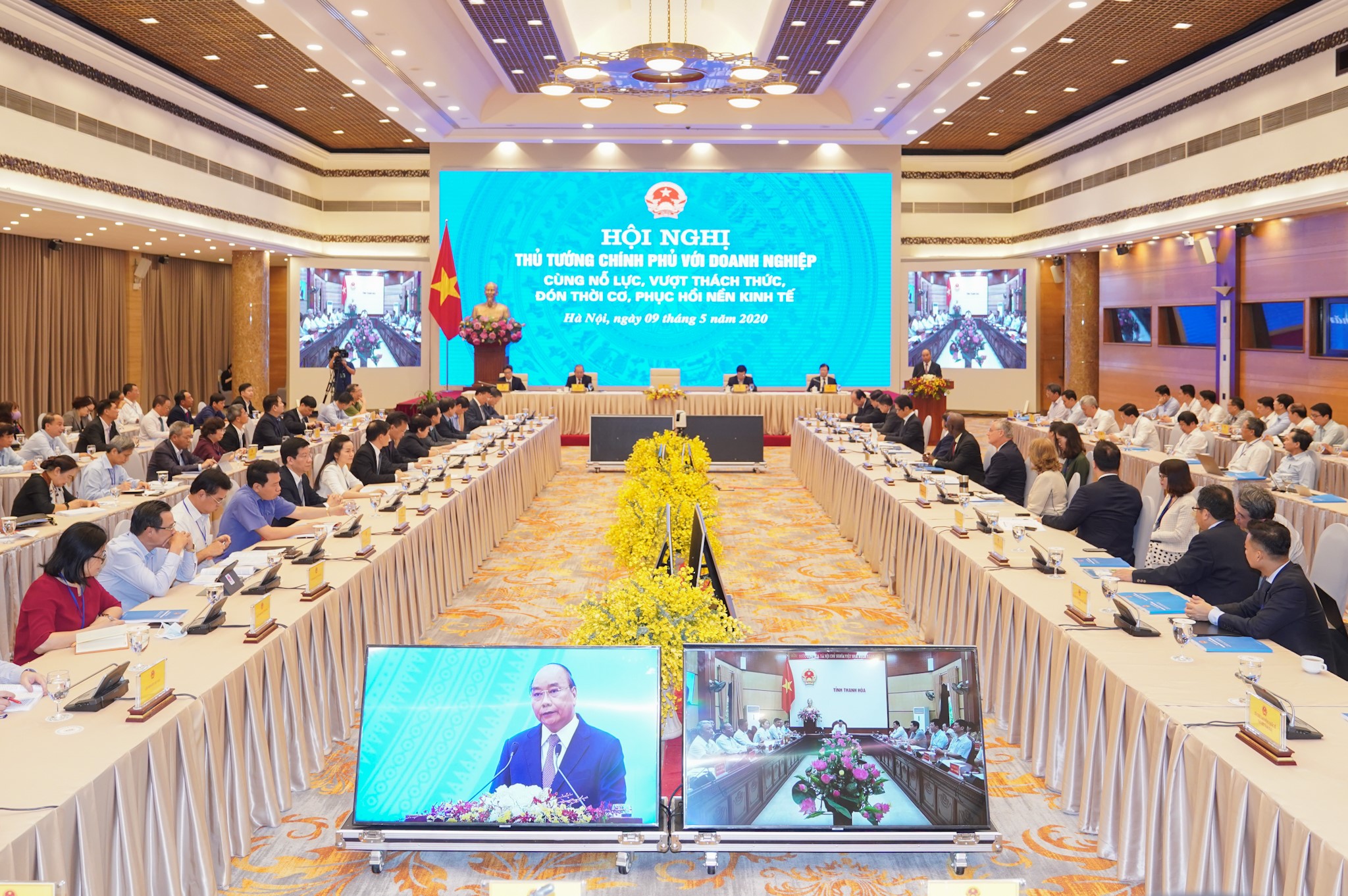 Conference on the 9th of May, chaired by Prime Minister of the Government

On behalf of the European Chamber of Commerce in Vietnam (EuroCham), Chairman Nicolas Audier attended the event and delivered a speech. “EuroCham welcomes the swift and decisive actions of the Government to address the spread of this pandemic. Vietnam’s response – combining swift public health measures with an effective economic package – has been recognised around the world as a model for other countries to follow. These actions have also helped to maintain the confidence of European enterprises, who continue to see Vietnam as a safe, attractive and competitive place in which to do business”, said Mr. Audier.

In his speech, EuroCham’s Chairman also stressed the importance of the ratification of the EU-Vietnam Free Trade Agreement (EVFTA). For a country so integrated into global supply chains and capital flows, it is essential that Vietnam protects not only its domestic enterprises but also supports the foreign companies who will be crucial to the country’s economic growth – particularly exports – once the international community has the disease under control and once global trade returns to normality. In this light, a successful ratification and implementation of the EVFTA is now more important than ever. 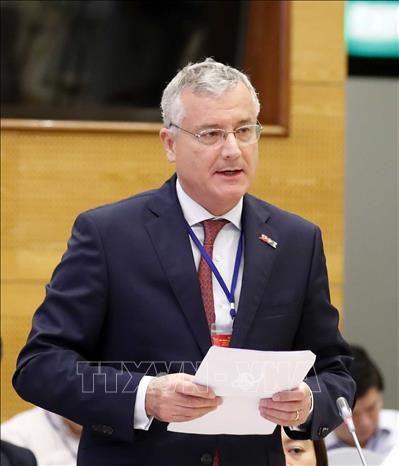 Chairman Nicolas Audier speaking at the event on behalf of EuroCham - Source: TTXVN

In addition, some other measures could be taken to ensure the continuity and fluidity of the economy. In particular, EuroCham recommends the Government of Vietnam ease the process for visa application for foreign experts coming to Vietnam and maintains the validity of marketing authorization of pharmaceutical products to ensure the supply of medicines.

Vietnam could use its position as Chair of ASEAN in 2020 and a non-permanent member of the United Nations’ Security Council to call for a conference to discuss recovery and stimulus packages, promoting PPP projects and ODA investment not only in Vietnam but for the ASEAN sub-region. Moreover, the economy currently operates in the form of supply chain. Therefore, maintaining production - especially exports - will support workers and ensure that they are able to maintain minimum revenues through this hard time. Besides, the application of valid electronic signature, electronic dossier submission and particularly utilising the National Public Service Portal should be enhanced as far as possible.

Concluding his speech, Mr Audier emphasized that EuroCham, representing over one thousand members and acting as the bridge between the authorities and European business, commits to remain a firm partner to Vietnam in the fight against COVID-19 and during the economic recovery, and to support Vietnam’s socio-economic development and continued international integration.

At the meeting, other foreign Chambers of Commerce (JCCI, KoCham, US ABC) also appreciated the strategy of Vietnamese Government in fighting COVID-19. Many solutions were proposed by both the international community and Government top leaders to help the country’s economy recover quickly.

Speaking at the conference, Minister of Planning and Investment Nguyen Chi Dung advised the Government to implement numerous actions quickly to enable businesses to seize valuable opportunities for economic recovery and sustaining growth. The COVID-19 pandemic has built a new consumption trend and brought new business models, contributing to the establishment of new value chains and breakthrough development in certain areas. New free trade agreements like the CPTPP and the EVFTA will serve as an advantage helping Vietnam to join global supply chains, innovate machines, equipment, and technology to reduce costs and improve the competitiveness of local businesses. 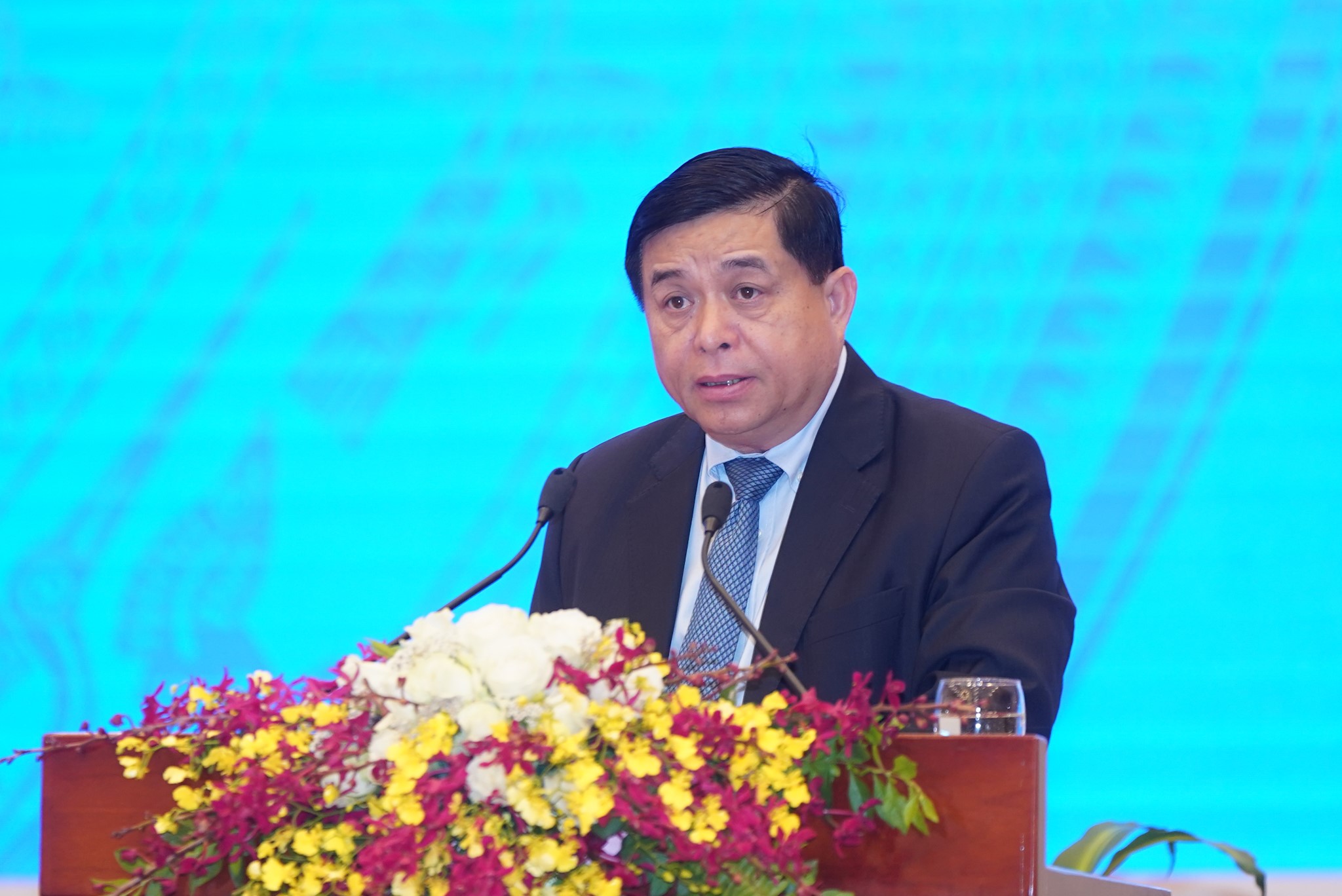 Minister of Planning and Investment delivering a speech at the conference

In the remarks by H.E. Mr. Nguyen Xuan Phuc, the Prime Minister (PM) called for greater efforts to restart the national economy with the aim of achieving a GDP growth rate of over 5 percent and keeping inflation under 4 percent this year.  To that end, the PM ordered a focus on attracting investment from domestic economic sectors, firstly the private sector, and foreign direct investment (FDI), stepping up exports, promoting public capital disbursement, and encouraging domestic consumption.

The PM reiterated the dual target of fighting the pandemic and maintaining economic activities, along with administrative reform and restructuring. On this occasion, H.E. Nguyen Xuan Phuc tasked businesses with promoting patriotism and respect for the law, sharing difficulties with the Government, staying united, cooperative, dynamic and creative, and maintaining determination. Local businesses need to contribute to the country's growth so that the national economy could develop in accordance with the V shape but not the U or W shapes. 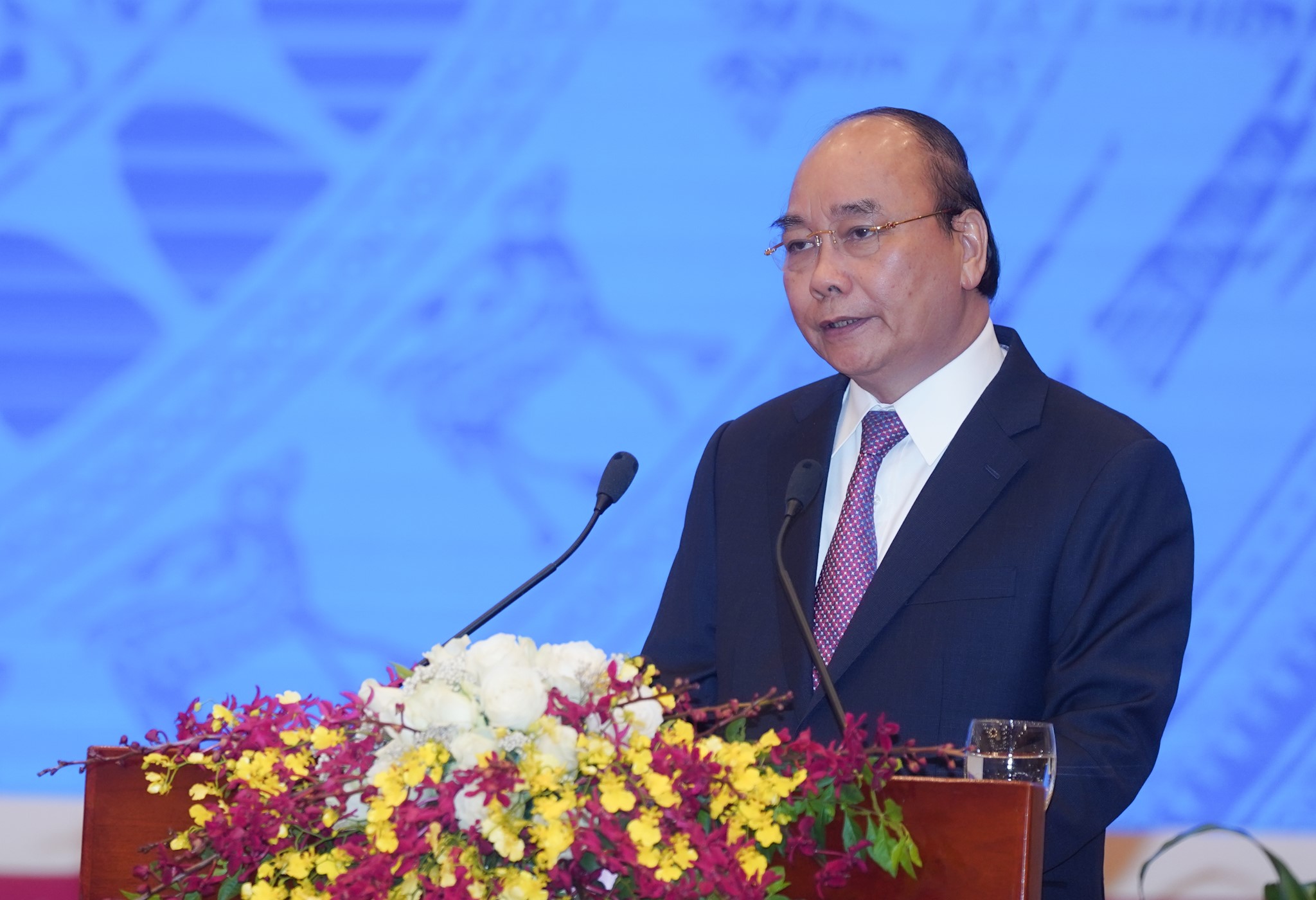 In hís closing speech, the Prime Minister also agreed that it is essential to continue to ease the regulations and bring foreign experts to Vietnam. The Government has to take advantage of new FTAs, including the EVFTA, helping to boost the country’s economic recovery. He requested all domestic and foreign business associations to update information and collecting issues from their members in a timely manner, so that the Government can carry out effective measures to support the business community. 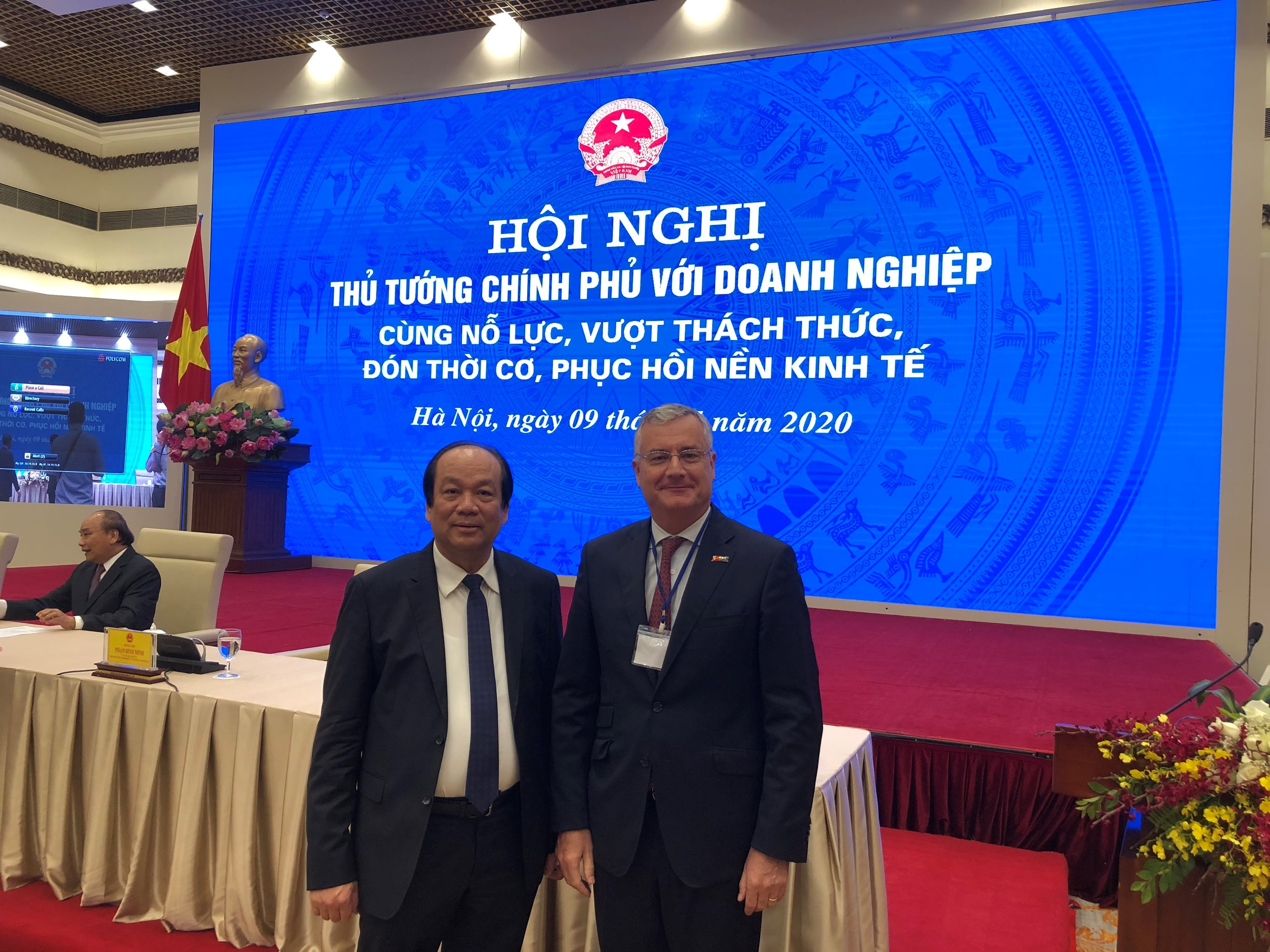 With Minister, Chairman of the Office of the Government H.E. Mai Tien Dung 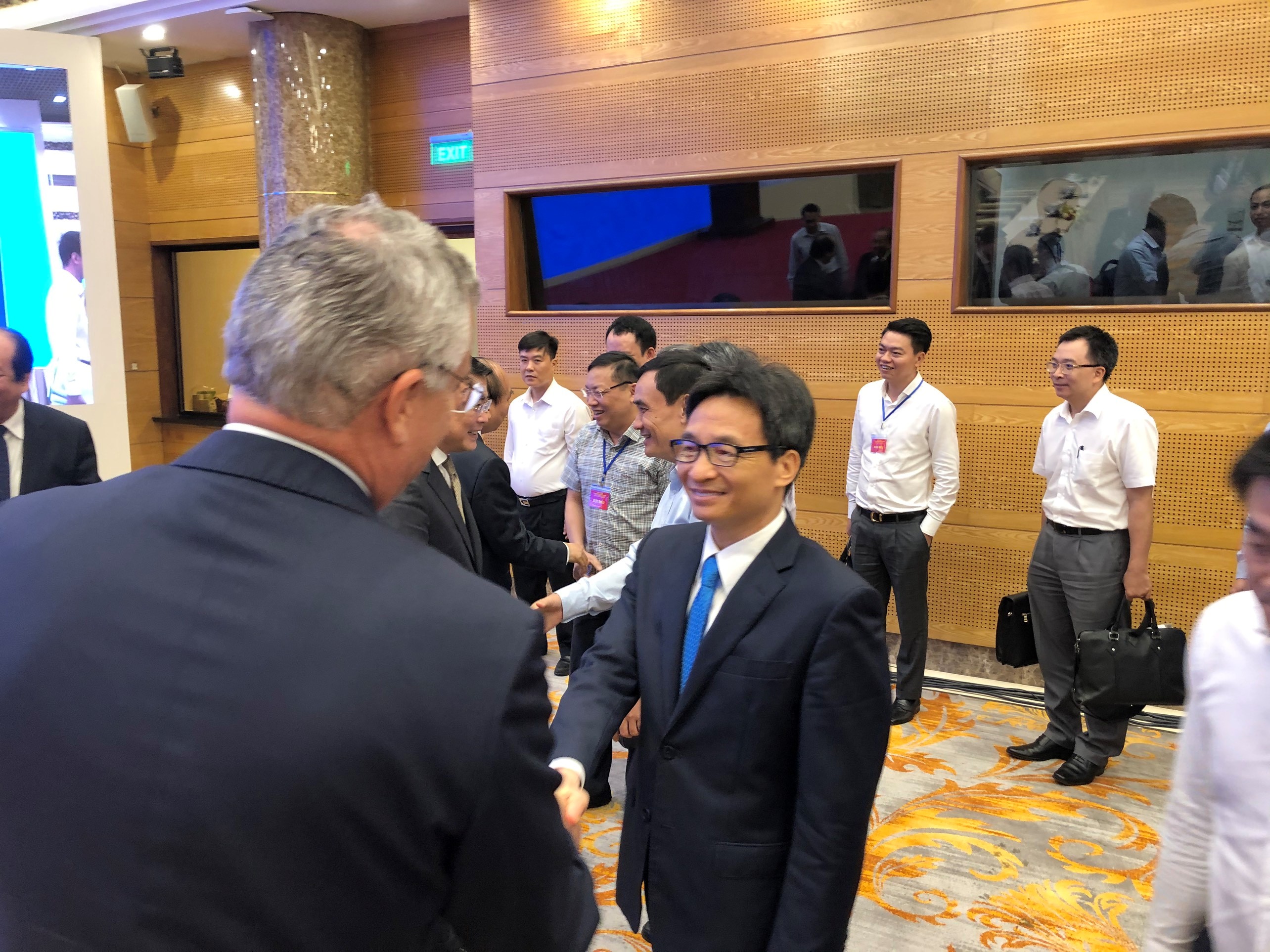 With DPM Vu Duc Dam,
Head of the National Steering Committee for Covid-19 Prevention and Control 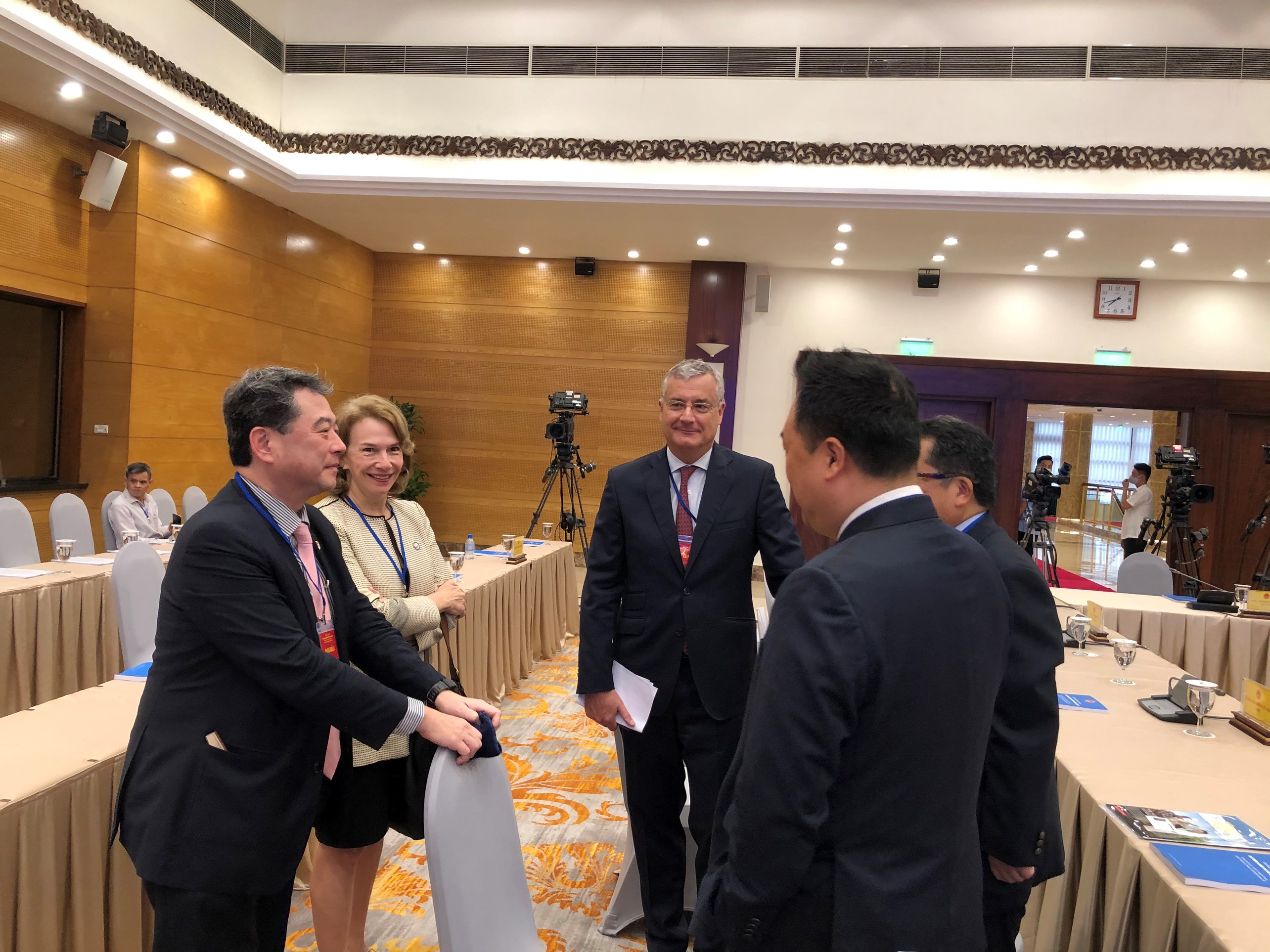 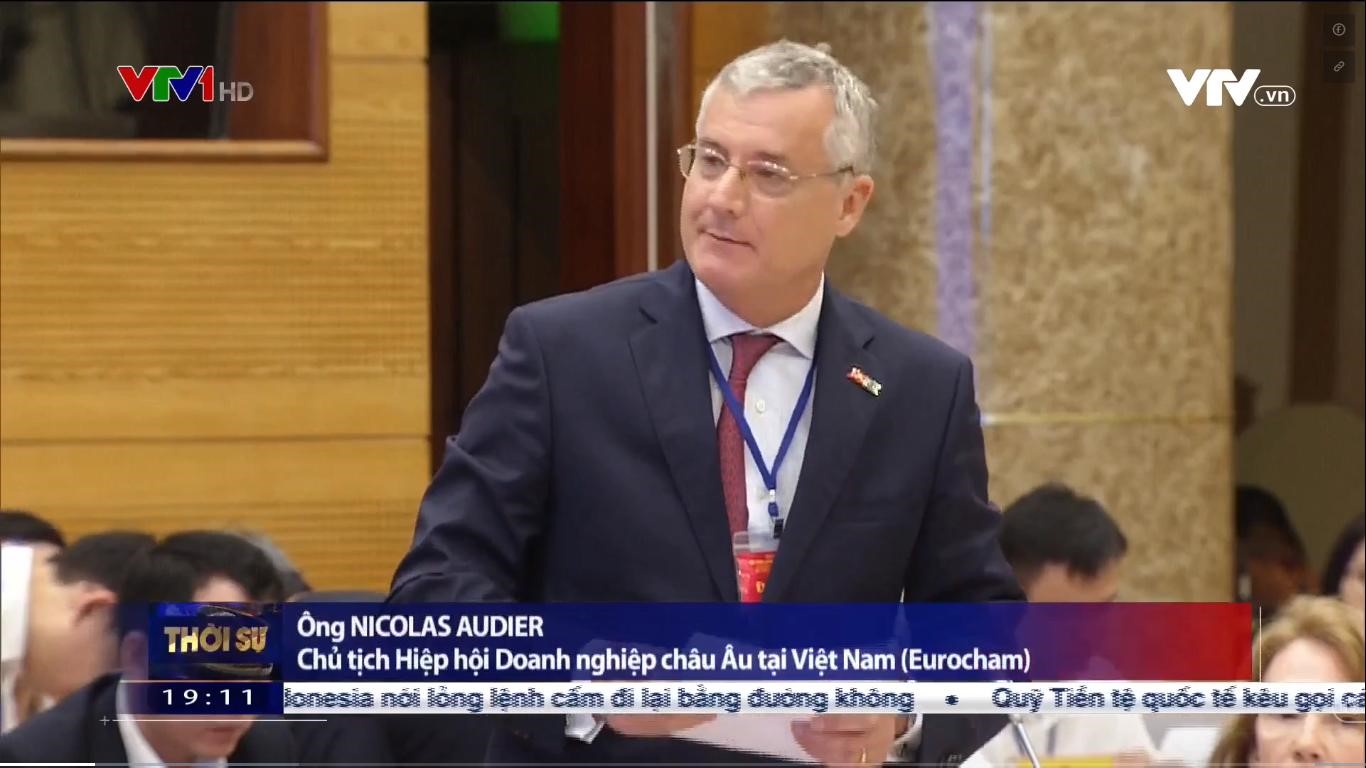 Interview with National Television (VTV1) after the Conference