On the 27th of September, EuroCham and the Ministry of Foreign Affairs (MOFA), Department of Foreign Affairs for Provinces, in collaboration with Ben Tre authorities co-organised a seminar “Opportunities for Ben Tre – Europe Economic Cooperation”. The event attracted more than 80 delegates representing MOFA, Ben Tre provincial government, European Chamber of Commerce in Vietnam and local businesses. 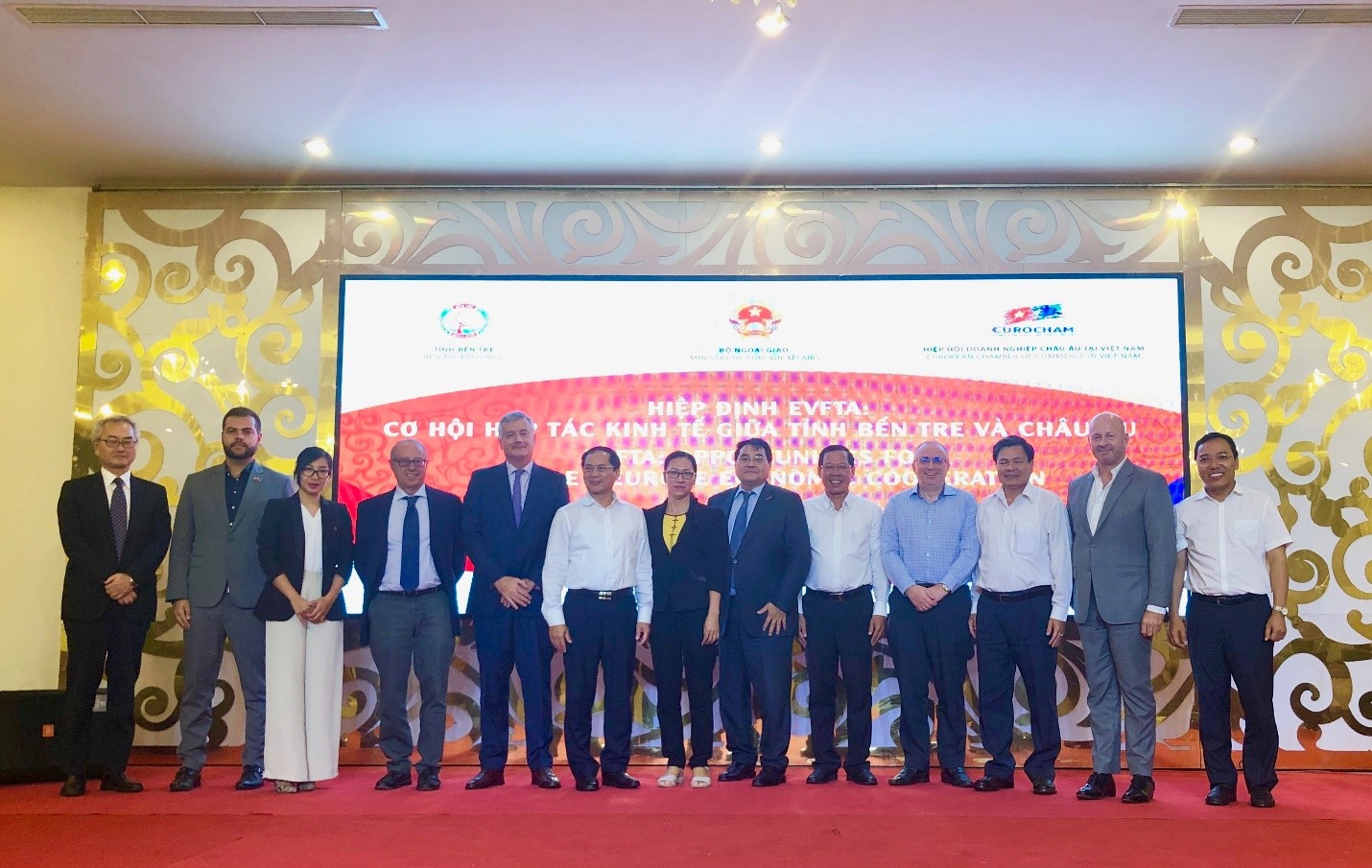 Speaking at the conference, H.E. Mr. Bui Thanh Son, Standing Deputy Minister of MOFA, affirmed that the EU – Vietnam Free Trade Agreement (EVFTA) and EU – Vietnam Investment Protection Agreement (EVIPA), signed on 30 June 2019, is a historical milestone in bilateral relations between the EU and Vietnam. The trade deals open up a new chapter, helping to elevate ties to establish a more comprehensive strategic partnership to the benefit of localities, businesses and citizens of both sides. The Deputy Minister stated that the organisation of this event showed the province’s active contributions to international integration and national prosperity. This is an important step to prepare for effectively taking advantage of the benefits brought by the agreements and attracting quality FDI. He also lauded Ben Tre as one of the localities with a high development index, ranking first in the Provincial Governance and Public Administration Performance Index (PAPI) and fourth in the competitiveness index in 2018. This is a foundation for the province to promote international economic integration in the future, he said. 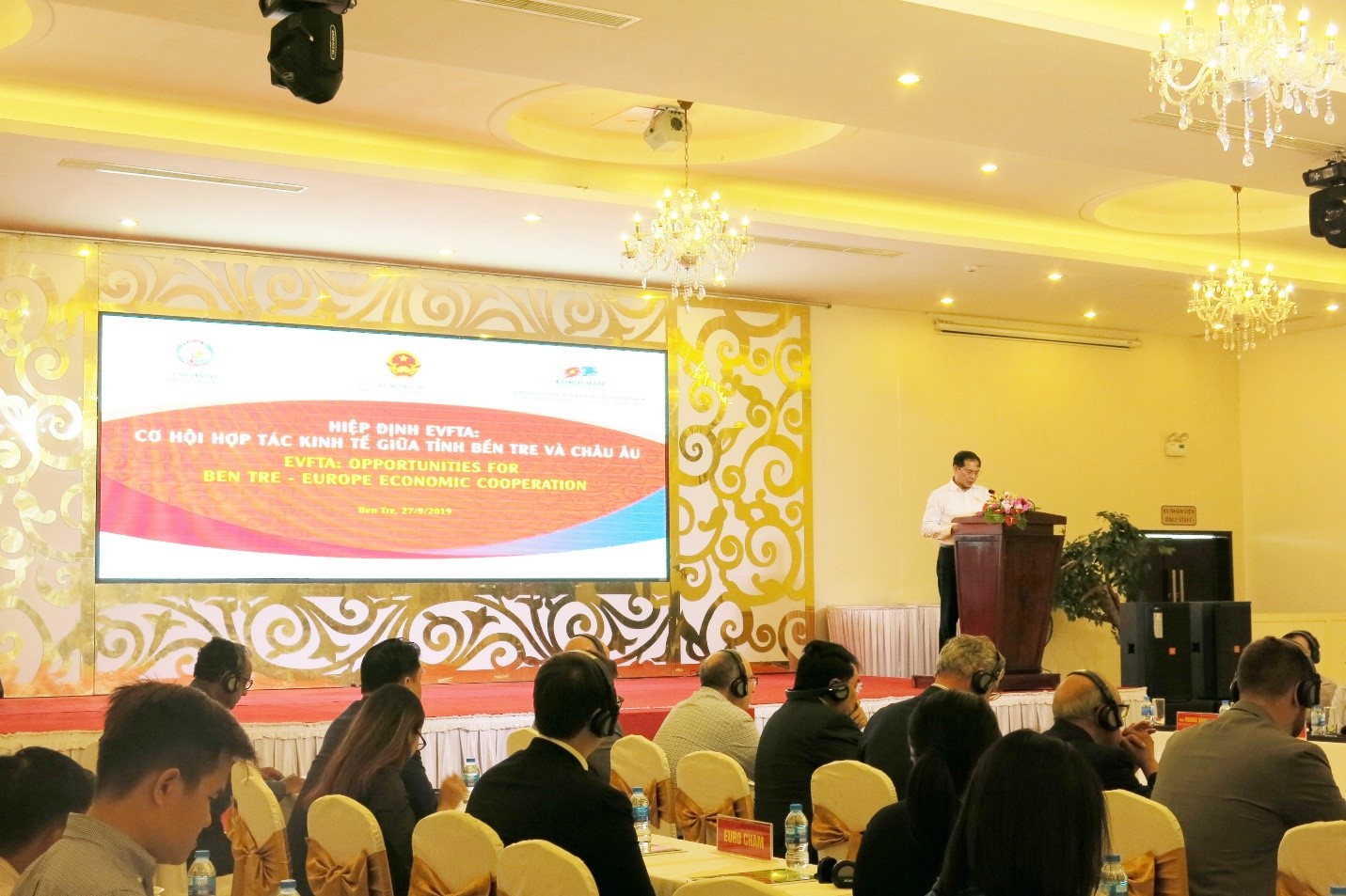 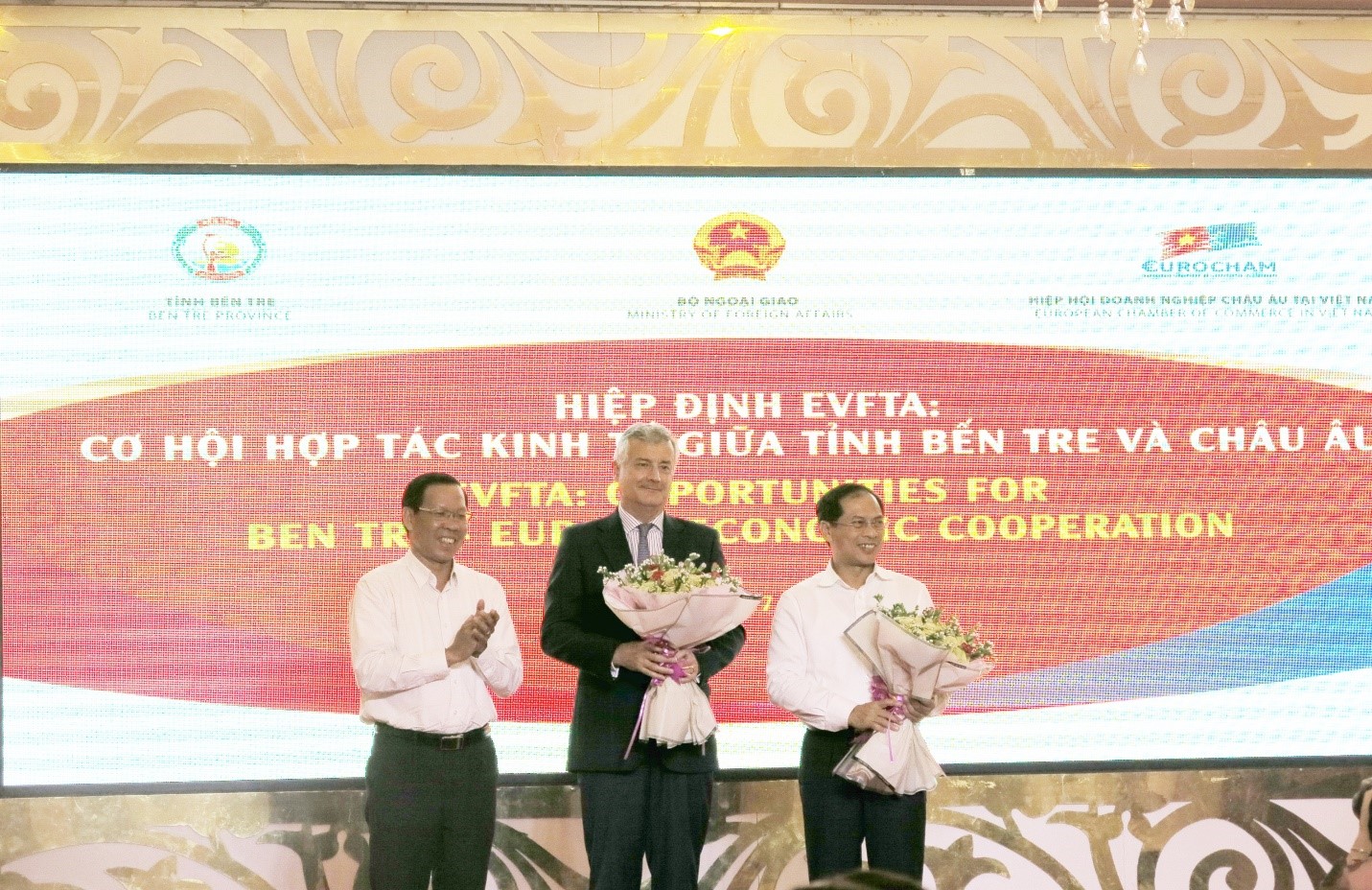 According to Provincial Party Secretary H.E. Mr. Phan Van Mai, Ben Tre has always identified the foreign-invested economic area as one of important investment attraction activities of the province. The provincial leader committed to respect and protect the legitimate rights and interests of foreign investors. In the direction of foreign investment cooperation, Ben Tre prioritises projects with advanced and cutting-edge technologies which are also efficient and modern helping promote connection of global value chains in production and supply chains to maximize the gains. “We are confident that European investors are partners we want to invite due to their competency and having international experience. Ben Tre province always stands ready to welcome and create favourable conditions for investors to research, propose and deploy projects in Ben Tre” the Party Secretary affirmed. In the upcoming time, the province will have specific plans and actions to approach the EVFTA to adapt and attempt to meet the EU requirements helping local firms tap into the benefits offered by the FTA. Mr. Pham Van Mai hoped that the Ministry of Foreign Affairs would continue to facilitate the economic cooperation activities between Ben Tre and Europe. 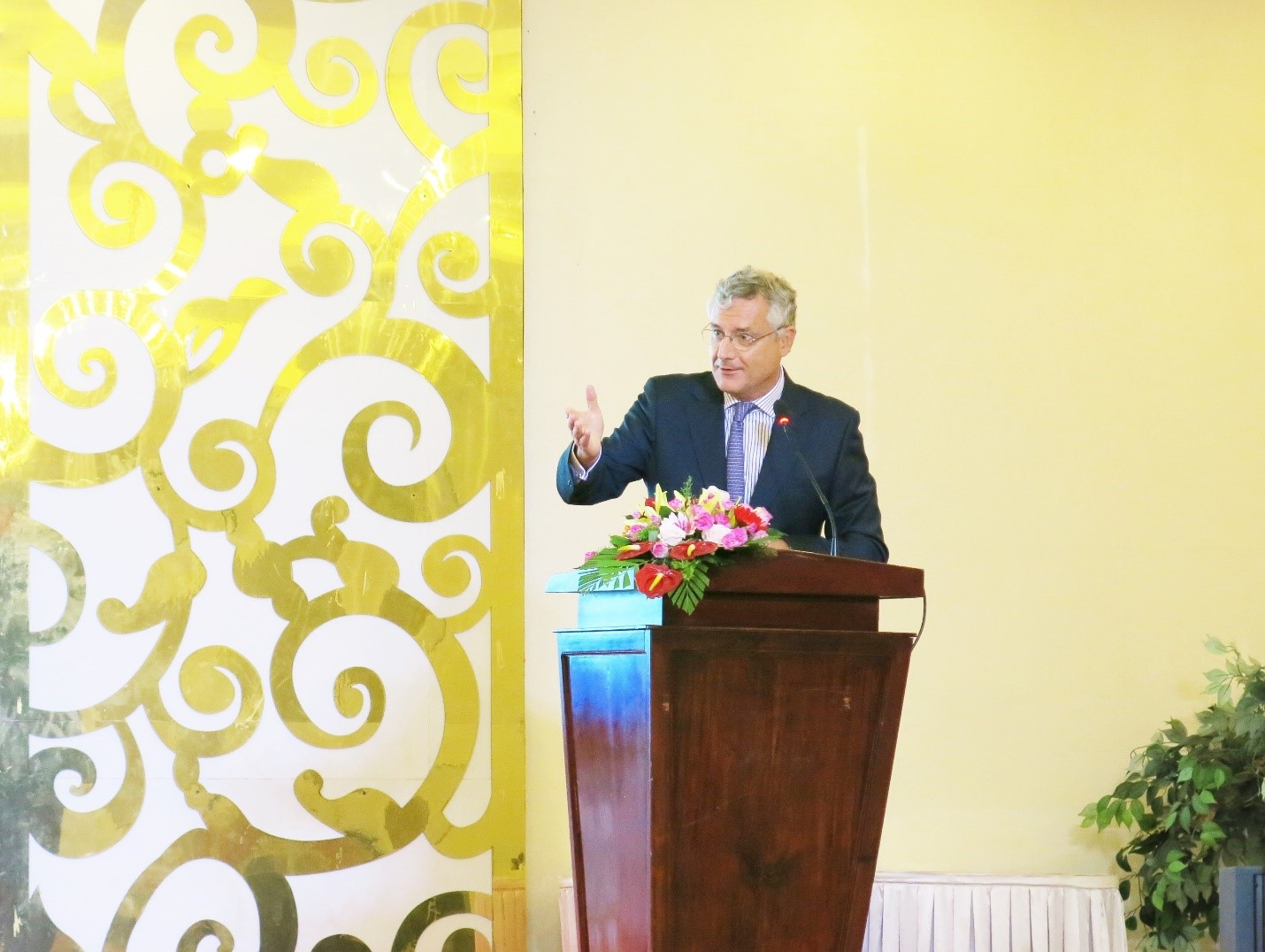 Attending the event, the Chairman of EuroCham Mr. Nicolas Audier provided the overview of EVFTA, tariffs and benefits for Vietnamese companies in general and for Ben Tre on specific sectors in particular. From EuroCham side, he affirmed to strongly commit to continue supporting this process through members and Sector Committees to remove all trade and investment barriers while waiting for the ratification and also to facilitate cooperation between European and Vietnamese partners. Therefore, once the trade deal is implemented, it would bring new waves of EU investment to Vietnam, specifically in sectors such as Food and Agriculture; Green Growth including water, waste management & renewable energy, Tourism & Sustainable development and others. However, the FTA as a new generation trade deal is also a driving force to accelerate Vietnam’s growth and development thanks to the improvement on rules of origin, safety and quality standards and environment protection. Particularly, EVFTA would provide Ben Tre with great chances to reach EU market through the above mentioned sectors. 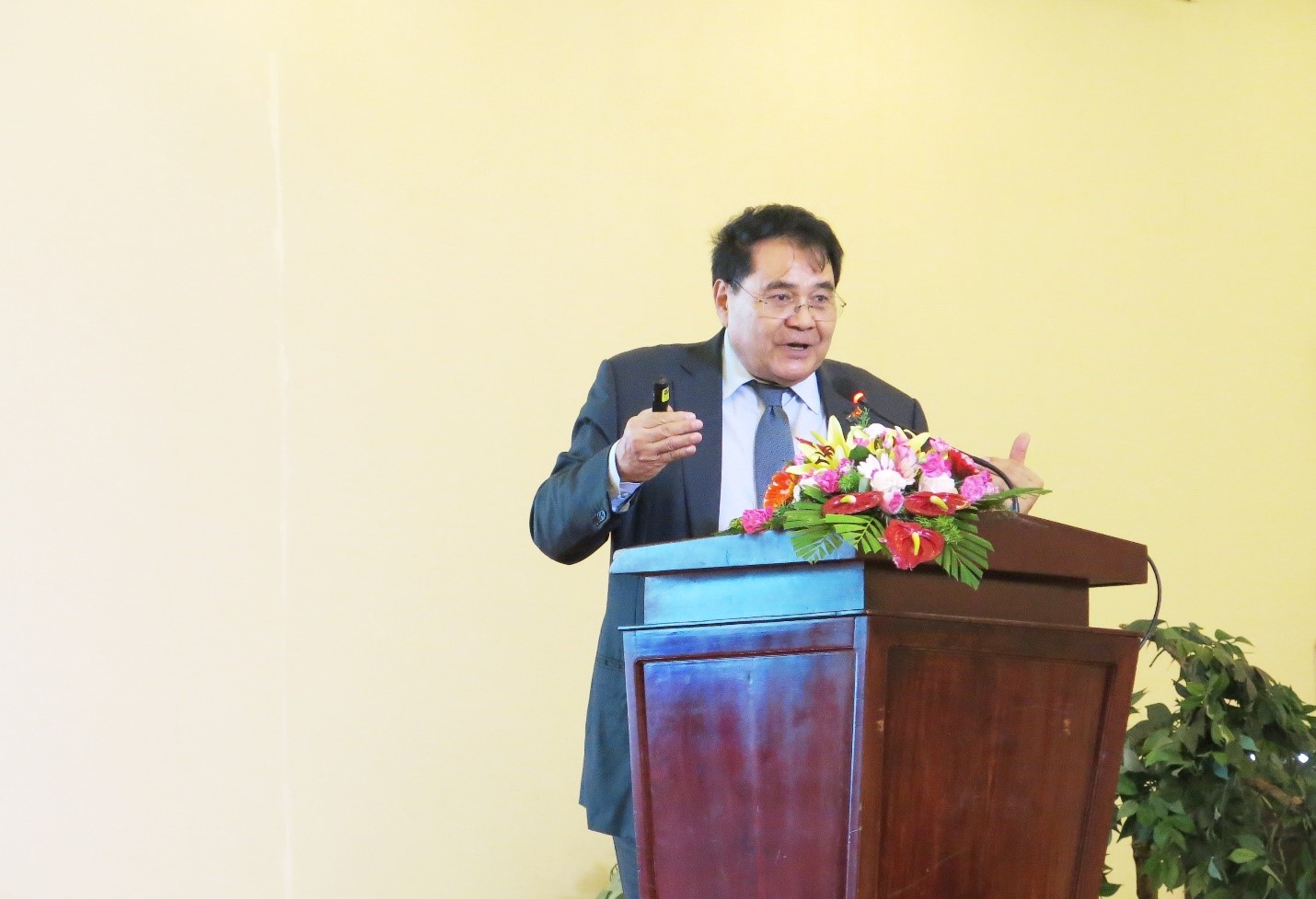 In the further presentation on the EVFTA for Ben Tre, Vice-Chairman of EuroCham, Mr. Jean-Jacques Bouflet described export opportunities on specific sectors with tariff reduction and elimination. Moreover, he presented expected changes after the EVFTA, especially the recognition of the Geographical Indications (GIs) as a distinctive sign used to identify a product originating in a territory of a particular country, region or locality. Vietnam has registered totally 39 GIs and, in 2018, Ben Tre registered two GIs for Pomelo (00062) and Xiem Xanh Coconut (00063). Based on the mentioned changes, Mr. Bouflet urged Vietnamese businesses to make more efforts to comply with the EU market’s stringent requirements; combat against Illegal, Unreported and Unregulated (IUU) fishing and removal of “yellow card” status; promote marketing of Ben Tre in the context of Mekong Delta, Metro in Ho Chi Minh City- Ba Ria-Vung Tau to leverage on international airports and logistics. Moreover, in order to enhance the province’s competitiveness, it should shift to advanced production and processing systems, he added. 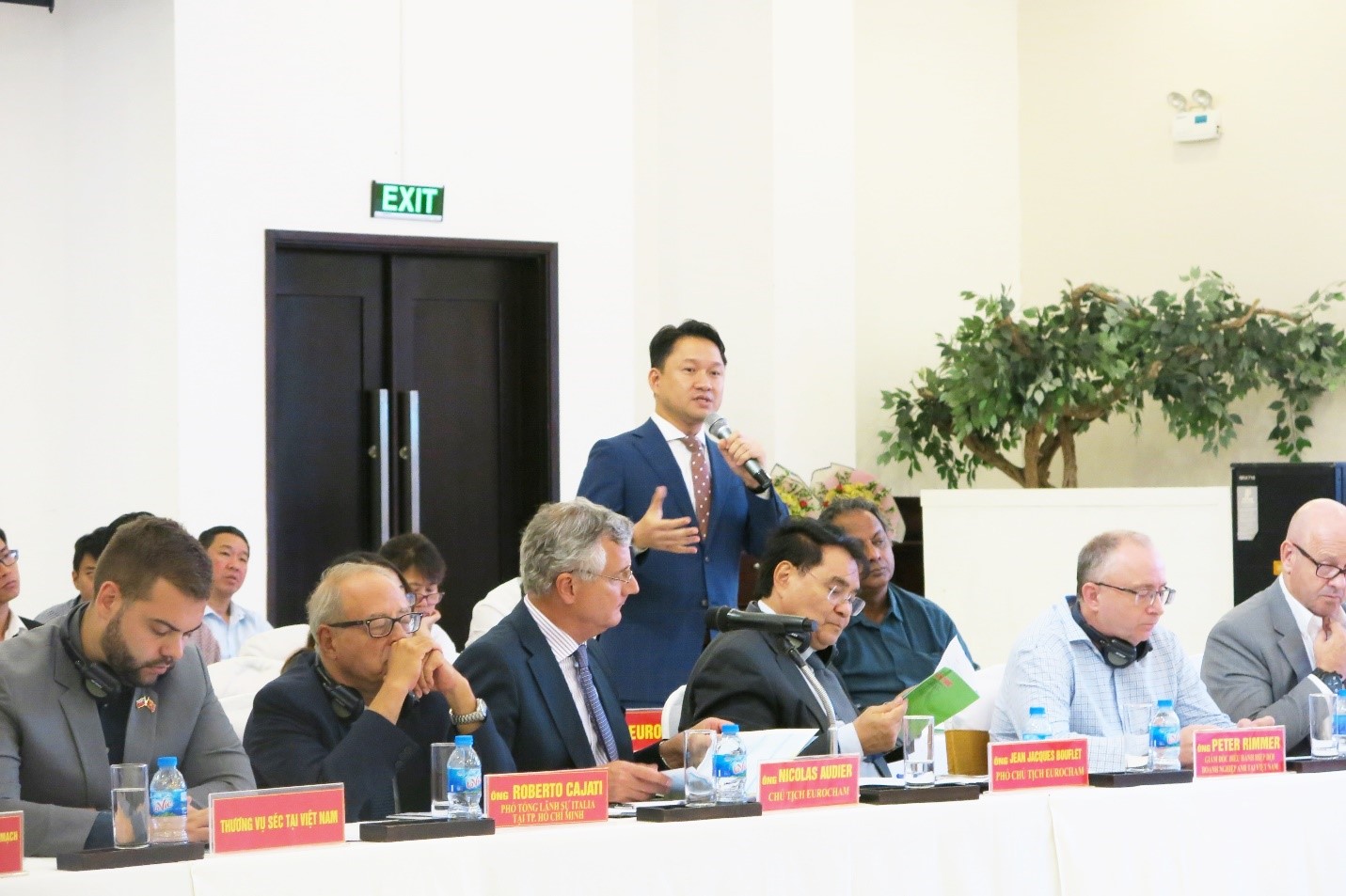 Speaking on behalf of EuroCham’s Tourism & Hospitality Sector Committee, Mr. Vu Minh Anh stated that tourism is considered one of the key sectors in Ben Tre. In 2018, Ben Tre welcomed 1.6 million tourists, showing that the province has more potentials in this sector. Therefore, he recommended Ben Tre focus on its strengths and local resources and develop products from coconut trees, create homestay services, upgrade infrastructure, promote quality services, and provide support policies for tourism businesses. In addition, efforts should be made to further enhance the area as a destination for local and international travelers by facility improvement and environmental protection to promote eco-tourism. EuroCham has always supported the idea of having visa exemption for all European countries so that all European tourists can have a chance to come to visit Vietnam and Ben Tre.
Until the end of 2018, the province attracted 51 FDI projects with total registered capital of US $862.84 million USD. Most investors come from: EU (Belgium, Netherlands), Japan, Korea, USA, Belgium, Taiwan, etc. investing in the major industries like processing agricultural and aquatic products, supporting technology for automobiles, processing leather shoes, garments, renewable energy, etc. There are also 221 domestic investment projects with a total registered capital of VND 44,591.15 billion in Ben Tre. EuroCham Board and members will follow up to bring more investment opportunities to not only Ben Tre but also other Vietnamese provinces and facilitate the early ratification and implementation of the EVFTA.