WHITEBOOK 2016: PRESENTATION TO MEMBERS AND MEDIA

The European Chamber of Commerce in Vietnam (EuroCham) is pleased to announce the launch of EuroCham’s Whitebook 2016. The Whitebook provides a concise view of key concerns affecting European businesses in Vietnam in regards to trade, investment, growth and employment. EuroCham Whitebook 2016 is available online at http://www.eurochamvn.org/Whitebook

This is the 8th edition of EuroCham’s annual advocacy publication on Trade / Investment Issues & Recommendations. For the first time, the Whitebook launch was accompanied by a half-day conference engaging key stakeholders and media. The scope was broadened and included 4 panel discussions, speeches by dignitaries and a presentation on the EU-Vietnam Free Trade Agreement (EU-VN FTA). The “EU and Vietnam Economic Cooperation Conference: EuroCham Whitebook 2016 Launch & EU-Vietnam FTA Outlook” took place on the 2nd of March from 8:00 am to 14:00 pm at Sofitel Plaza Hanoi and attracted over 350 participants. The conference was held jointly by EuroCham, the Vietnam Chamber of Commerce and Industry (VCCI) and the Delegation of European Union to Vietnam (EU Delegation), with the support of the Ministry of Foreign Affairs and in partnership with Prudential Vietnam Assurance. 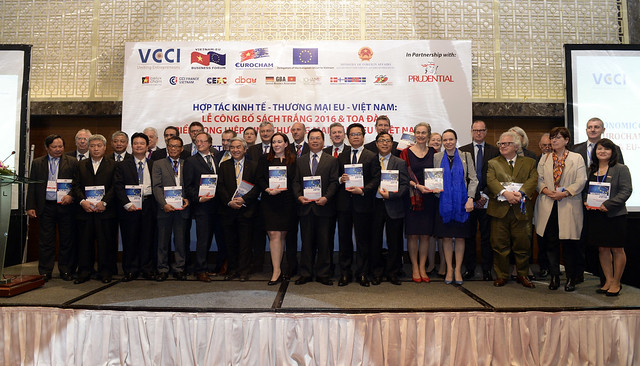 At the occasion of this conference, a Strategic Cooperation Agreement between VCCI and EuroCham was signed to develop the partnership on providing information and support on the EU-VN FTA to the respective members. 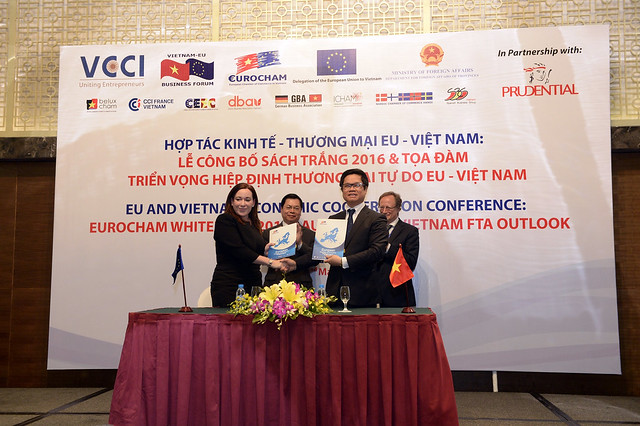 Against the backdrop of the recently concluded and published EU-VN FTA, the conference gathered participants from a large range of Ministries, Government authorities and Provinces as well as European Embassies. The presence of leading European and local companies reflected the strong interest of the business community in Vietnam in this bi-lateral trade treaty.
The 8th edition of the EuroCham Whitebook 2016 is a collective expression of the views of EuroCham member companies, which operate in a wide range of industries. The publication echoes the European business community’s desire to support the Vietnamese Government in the development of the current legal framework and a positive business environment in Vietnam, for the benefit of companies, investors and society.

Underlining the significance attributed by the Vietnamese government to the EU-VN FTA, H.E. Mr. Vũ Huy Hoàng, Minister of Industry and Trade, addressed the participants in an opening speech.

H.E. Mr. Bruno Angelet, Ambassador-Head of the EU Delegation, highlighted in his key note speech that the treaty represents an important milestone in the bilateral commercial, economic and investment links between Vietnam and the European Union. 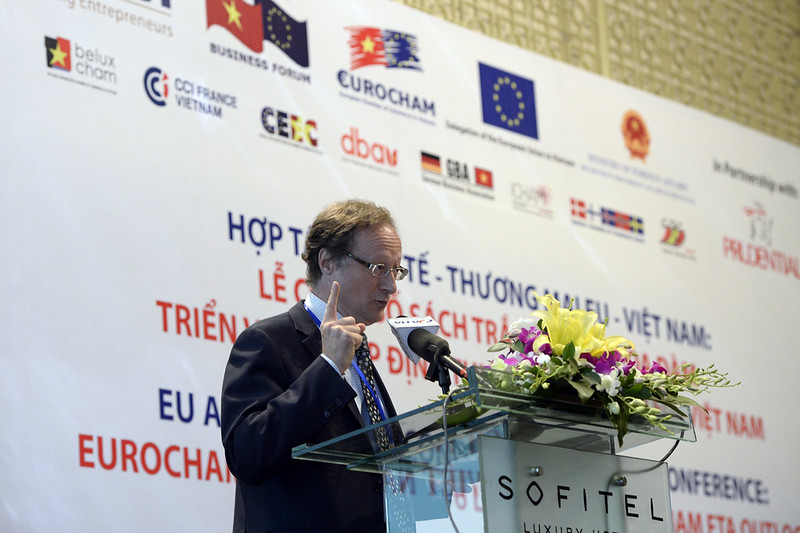 Similarly Dr. Vu Tien Loc, President and Chair of VCCI emphasized in his key note speech the future impact of the EU-VN FTA both for Vietnamese and foreign enterprises, and welcomed the initiative to cooperate even closer with EuroCham. 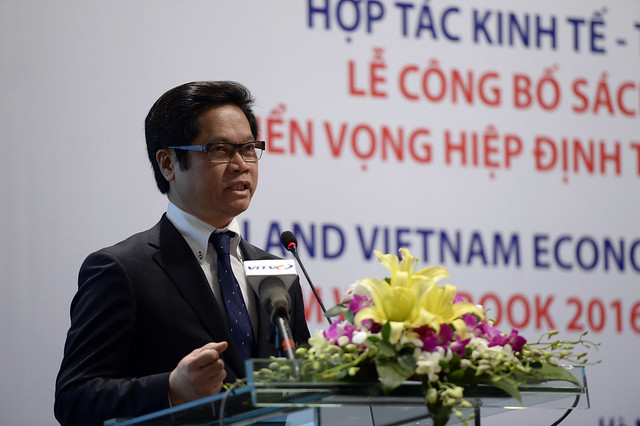 EuroCham Chairwoman Nicola Connolly stated in her key note speech that the bilateral treaty with the EU was another step forward to further integrate Vietnam into the global economy. 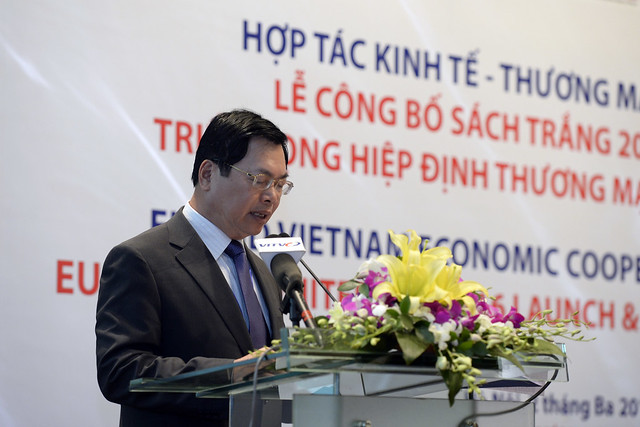 Chairs of Sector Committees - key contributors of the Whitebook 2016 - together with representatives of different Ministries joined panel discussions in four sessions discussing on key areas like Food and Health, Consumer Choice, Legal and Tax/Customs, and Improving Business Environment. Furthermore and Miriam Garcia Ferrer, Head of Trade/Economics Section of EU Delegation provided an outlook on the EU - Vietnam FTA.

In her closing remarks, Nicola Connolly shared with the audience that the Whitebook 2016 launch is the starting point for further in-depth dialogues between EuroCham’s Sector Committees and the respective Ministries and government authorities.

1,500 copies of this year’s edition of the Whitebook will be provided to Ministries, Embassies and Consulates, Chambers of commerce / Business Groups (Foreign and Local), media, trade missions to Vietnam and distributed at conferences in Vietnam and Europe. The EU-Vietnam Economic Cooperation Conference will be followed by a series of meetings and panel discussions to provide further insight into the EU-Vietnam FTA under the cooperation between EuroCham, VCCI, the EU Delegation, MOFA and other stakeholders.

On the 3rd of March, the Whitebook 2016 was introduced to EuroCham members and media in Ho Chi Minh city. The event was held at Le Méridien Saigon from 8:00 to 10:30 with a total of 150 participants, including representatives from Consulates, Departments in Ho Chi Minh City, e.g. Department of Planning and Investment, Department of Industry and Trade, Department of Science and Technology ect., as well as EuroCham members and media. Following the key note speech by H.E. Mr. Bruno Angelet. Ambassador - Head of Delegation - Delegation of European Union to Vietnam, Mr. Nguyen The Hung, Deputy General Director of VCCI in Ho Chi Minh city, and EuroCham Chairwoman Nicola Connolly, Chairs of Sector Committees presented their key issues and recommendations covered in the Whitebook 2016 and answered questions from the audience.

H.E. Mr Bruno Angelet, Ambassador - Head of Delegation - Delegation of European Union to Vietnam stated: “This is the first event allowing both the Minister of Trade and Industry and the EU Delegation in Hanoi to present publicly the EU-Vietnam FTA since the publication of the texts on 1 February. The EV FTA is a key building block in the comprehensive partnership between Europe and Vietnam. We are happy to announce, as from today, that both sides have started working on all preparatory measures for full implementation, in line with our Leaders' Joint Statement of 2 December 2015. We will also promote the Agreement and its potential across to country and towards our respective business communities to highlight the wonderful opportunities it opens for our common future. No doubt, the EU and Vietnam have a splendid opportunity ahead and can build one of the best partnerships for the future in South East Asia.”

VCCI President and Chairman, Dr. Vu Tien Loc emphasized: “EuroCham has been VCCI’s key partner for years, and we are happy to see the relationship is even more deeply reinforced in order to facilitate the implementation of EU-VN FTA with the signing ceremony of a strategic cooperation agreement between VCCI and EuroCham. EuroCham’s Whitebook has been and will continue to be a reliable and effective platform for the Government to have an overview of concerns and recommendations of EuroCham member companies in a wide range of industries.”

EuroCham Chairwoman Nicola Connolly commented: “Over the last 12 months EuroCham has observed and welcomed effort and reforms that have been initiated by the Vietnamese Government, yet there is more to be done to both secure the achieved as well as realize further investment and trade in the market. EuroCham’s quarterly Survey to its members, the Business Climate Index has remained stable over the last year (75-77-75-82). The last quarter’s index has increased to 82, indicated the significantly improved business confidence of our members.”

She also stated: “Cooperation of EuroCham, VCCI and EU Delegation to organize this EuroCham Whitebook 2016 Launch & EU-Vietnam FTA Outlook has demonstrated efforts from both side EU and Vietnam to improve the Vietnam business climate for a successful implementation of the EU-Vietnam FTA.” 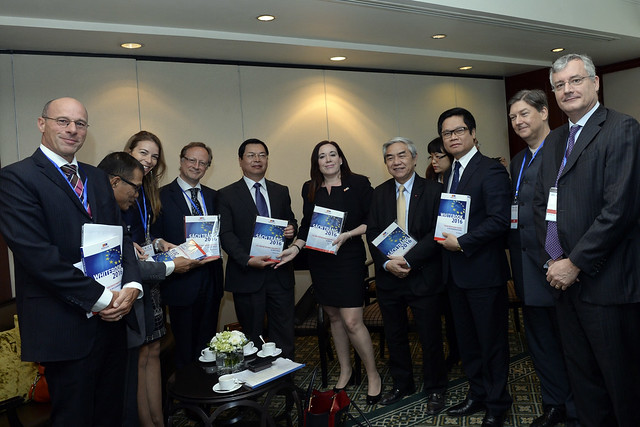