EU-Vietnam FTA: Eurocham and EVBN brought together key EU, Government and industry speakers, sharing firsthand insights on the impact of the new agreement for European and Vietnamese businesses

The European Chamber of Commerce in Vietnam (EuroCham), together with the EU-Vietnam Business Network (EVBN) organised the EVFTA Conference: How to prepare your business for the new era of EU-Vietnam Trade & Investment. The discussion focused on the progress of the negotiations that led to the establishment of the agreement. The conference was a unique opportunity to have firsthand contact with the actual negotiators of the EVFTA: EU Chief Negotiator Mr. Mauro Petriccione, and  Vietnam Chief Negotiator Vice-Minister of Industry and Trade Mr. Tran Quoc Khanh. 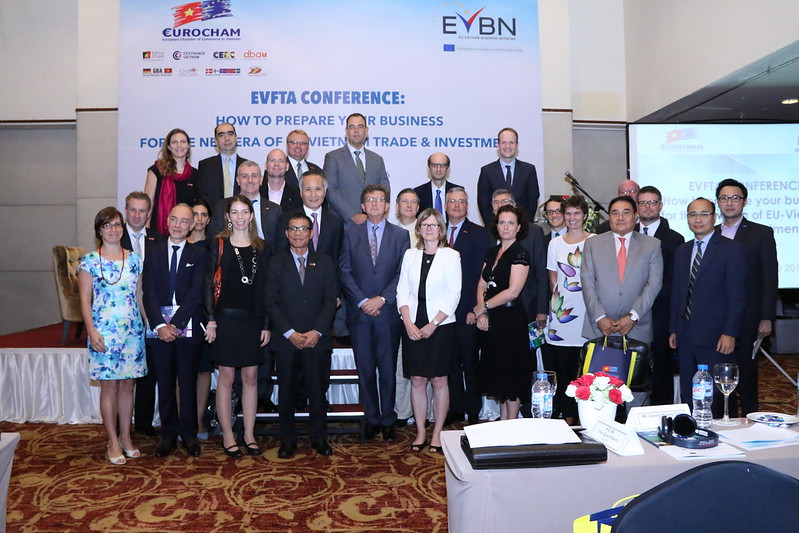 Vice-Chairman Nicolas Audier. Mr. Audier highlighted the contribution of Eurocham and its corporate members to this agreement, and the importance of discussing the roadmap to its implementation.

Speaking on behalf of the EU Ambassador to Vietnam, the EU Delegation to Vietnam’s Head of Trade and Economic Section Ms. Miriam Garcia Ferrer, stressed the open dialogue that led to the established EVFTA. The speaker highlighted the ambition of the agreement, considering it a breakthrough achievement which has the potential to bring about unprecedented and innovative benefits to Europe-Vietnam economic relations, with an impact on several other policy fields. Ms. Ferrer’s intervention was closed with the launch of the GUIDE TO THE EU-VIETNAM FREE TRADE AGREEMENT a publication targeting the business community which explains the content of the FTA.
(online version is also available here) 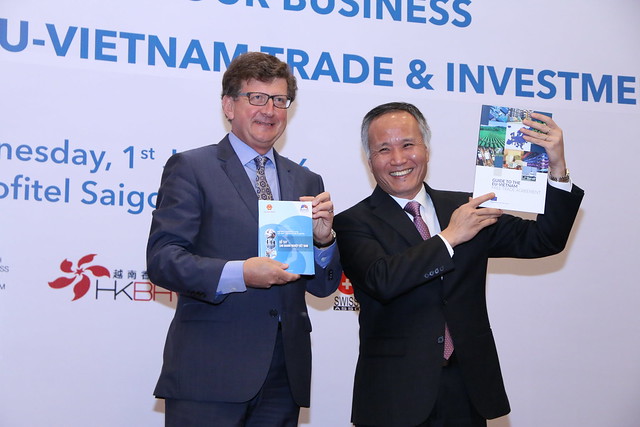 In the open dialogue, Chief Negotiators of the EVFTA shared insights on the proceeds of the negotiations.

In a diverse and rich discussion, Mr. Petriccione stressed the correlation between Vietnam’s internal economic reforms and the timing of this FTA, a balance which he deemed to have been found in the agreement’s text. It was also mentioned that this agreement creates an unmatched level playing field for European companies, which goes beyond other trade agreements to which Vietnam is a party. 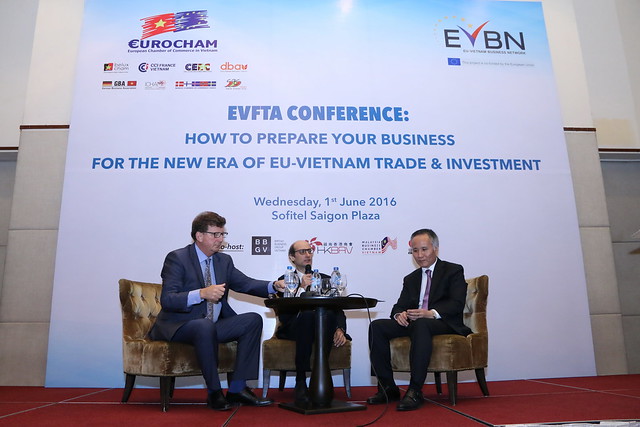 From the Vietnamese perspective, Mr. Khanh insisted that the FTA is in line with Vietnam’s current economic development and re-structuring, stressing the example of its recognition of the role of State-owned enterprises in the nation’s economy, granting them access to the European market. In regards to implementation, Mr. Khanh recalled the already ongoing reforms in Vietnam and how they are complementary to many measures in the EVFTA, calling for the business community to take part in the benefits that will be brought by the agreement.

The questions from the audience approached several topics, including capacity-building assistance of the EU to Vietnam for structural changes necessary to the implementation of EVFTA, geographic indicators, ensuring reduction of non-tariff barriers, complementarity with the Transpacific Trade Partnership Agreement (TPP), services market access, public procurement access, among others. The Q&A session received a very positive response from the audience, generating a lively debate.

After a short coffee-break, it was time for European business to deliver their Case study presentations on impacts/changes expected by the EVFTA.

They were initiated by Mr. Oliver Massman, Chair Eurocham’s Legal Sector Committee and Partner of Duane Morris, who discussed the impact of the EVFTA on supply chains. Mr. Massman stressed that Vietnam can only make the most of the Rules of Origin (RoO) conditions that it will benefit of in the European market if it quicly upgrades its supply chain value. He also emphasized that Vietnam can become the next textiles manufacturing hub in Asia, as tariffs in Europe drop to 0% over the next 7 years for most products. However, Mr. Massman insisted that building value-added supply chains, intensifying the dialogue among the private sector, and taking advantage of the trade diversification offered by the EVFTA have to become priorities for Vietnamese business. 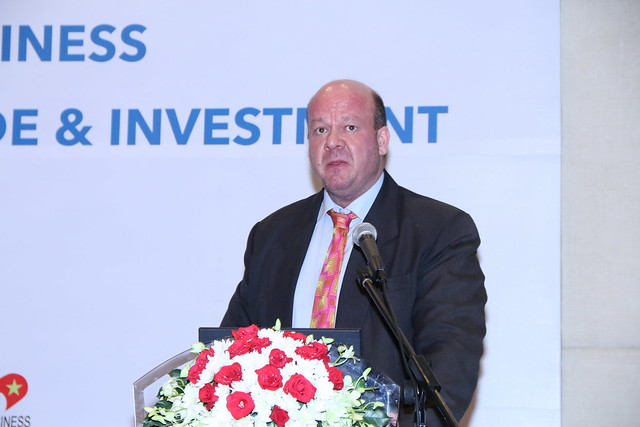 The second presentation was delivered by Mr. Jean-Laurent Ingles, Chairman of Unilever Vietnam, who stressed that the EVFTA will only bring advantages for European business if it impacts on Vietnam’s development. In his view, this meant betting on real partnerships with local business, the development of human capital, and respecting sustainability.

The third case-study slot was reserved for Eurocham’s Transportations and Logistics Sector Committee Chair, General Director of DHL Express in Vietnam Mr. George Berczely. The speaker dedicated his presentation to the implementation of the FTA against the background of improved cross-border trade with Vietnam. Mr. Berczely emphasized the need for innovative solutions that can benefit customs-holding time and urged European companies to work through their chambers of commerce to assess and monitor the implementation of measures to this end. 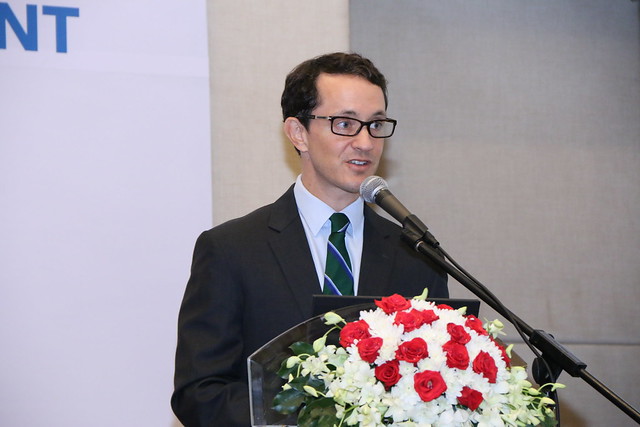 In his presentation, Chair of Eurocham’s PharmaGroup, Mr. Bradley Silcox raised the possibility of Vietnam becoming a new regional hub for the pharmaceutical industry. Mr. Silcox explained that this could be achieved through improvement in infrastructure, an equal standing for foreign industry in public procurement processes, and creating a win-win situation which could raise competitiveness against other foreign players. 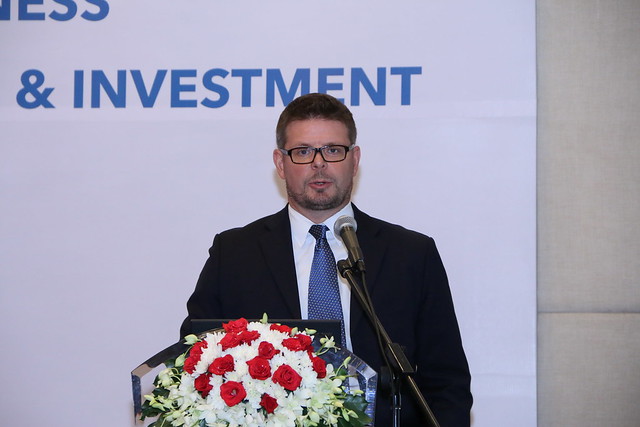 After the four short presentations, a panel ensued gathering the latter corporate representatives, the European Commission’s DG Trade Policy Coordinator for Southeast Asia Ms. Frauke Sommer (also part of the EVFTA negotiations team); and Mr. Luong Hoang Thai, Director-General of the Department of Multilateral Trade Policy at the Ministry of Industry and Trade.

The Q&A session allowed for the topics raised by the case-study speakers to be discussed with the EU and Vietnam Government representatives, moderated by Mr. Jean-Jacques Bouflet, Eurocham Senior Advisor. The discussion touched upon further aspects of the EVFTA debate, including, among other: the reach of the agreement in terms of trade facilitation, using the FTA momentum to attract more business from Europe to Vietnam and vice-versa; the future of sustainable FDI in Vietnam, financing instruments provided under the FTA for upgrading production means in Vietnam, among other.

At his closing remarks, Mr. Nicolas Audier, Vice-Chairman of Eurocham, recalled the highlights of the day’s discussion. Mr. Audier finished by stating that Eurocham will continue to engage in productive dialogues with its members, the Vietnamese authorities and stakeholders, and with the EU. This engagement will be continuously complemented with a series of Eurocham events dedicated to the EVFTA and related topics to take place throughout the year.